C.S. Lewis: the Most Reluctant Convert 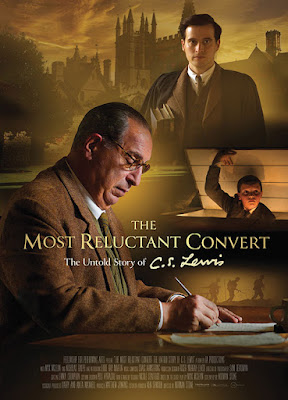 
If you already know Lewis you're going to love this film; if you don't, this will soon have you loving Lewis for the way he could put into words the wonder God works in his and our own hearts. This is the story of Lewis's conversion from ardent atheist to "the most reluctant convert," bowing his knee to God not because he wanted to, but because he couldn't do otherwise.

It's also a story superbly told. There are three different actors playing Lewis, one as a boy, another as Lewis in his twenties, and the third, portrayed by Max McLean, as Lewis in his fifties. McLean's Lewis, the Christian Lewis, is actually the film's narrator, "breaking the fourth wall" by talking directly to the audience and explaining the thoughts being thunk by the other younger still-kicking-against-the-goads Lewises. It's all shot on location, so we're able to walk along with the older Lewis through the halls of Oxford as he takes us, for example, to a pivotal discussion his younger self is about to have with J.R.R. Tolkien. What an absolute delight!

The showing I went to with my brother-in-law started with a 12-minute documentary, The Making of the Most Reluctant Convert. It was an odd way to begin, and a friend mentioned that this featurette was likely supposed to come afterward. But because the film itself has a non-stop intensity – not from car chases or explosions, but from the young Lewis's constant wrestlings with God – it was a help to have this slower introduction. Like the blurb on the back cover of a book, the featurette summed up what was to come, prepping us before we were launched right into it. Whether intentional or not, front-loading the featurette was brilliant, and if it doesn't come that way on the DVD, I'd recommend heading to the special features to begin with the documentary first.

Lewis fans will quickly notice that the dialogue is taken almost entirely from his books, all stitched together seamlessly by McLean himself. The dialogue is similar to the script he wrote for his one-man play C.S. Lewis Onstage which was the seed for this film version. But while the play is very good, the fully fleshed-out film is downright fantastic.

What makes this an amazing film is that the excellent acting, writing and craftsmanship are put in service to the more excellent work God did in Lewis's heart. God took a man angry at God and determined to run from Him, and transformed this rebel into the foremost Christian apologist of the twentieth century. And then He used that man as a spark for many thousands (millions?) more such transformations.

The closest thing to a caution I can offer is that Lewis doesn't offer complete answers to the theological difficulties his atheist self raises. That might be disconcerting to some, even as it is also one of the film's strengths. The fact is, there is no completely satisfactory answer to, for example, the problem of pain, and the film doesn't pretend otherwise. God has given us reason to trust Him, but He hasn't told us all, so sometiemes we do indeed need to trust Him.

From the twist right at the start to a conclusion that left us wanting more, this was a story superbly told. Add in a subject worthy of this craft and creativity, and I can't imagine how this could have been better; it is certainly one of the best films I've ever seen. And, lest you think I'm getting all gushy, I'll add that my brother-in-law liked it even more.

Watch the trailer below, and check out the movie website here to see if and when it might be playing near you. Hopefully, it will be available to rent online very soon.