Merrill's Marauders - the 5307th Composite Unit (provisional) - was a US combat unit that fought in South-East Asia during World War II.

In the course of five months in 1944 they trekked 750 miles through some of the worst jungle terrain in Burma, and fought in five major battle and countless other skirmishes. In addition to combat losses, their forces were diminished by typhus, malaria and dysentery, and further weakened by low supplies - the 2,800-calorie, daily ration packs they were provided would have been sufficient for most other forces, but not men asked to hike, climb and hack their way through the hot, humid, Burmese jungle.

The force, named after their commander, General Frank Merrill, made their name by taking on larger, more heavily armed Japanese forces and beating them, again, and again. They continued on, without reinforcements or rest until, by the time of their last battle, at Myitkyina, only 200 of the original force of 2,750 were present. The Wikipedia entry notes that at the end of this final battle only two "had never been hospitalized with wounds or major illness."

Merrill's Marauders is a mostly accurate account of this fighting force, and how they were asked to battle on, beyond endurance. This is a good story and great film for anyone interested in World War II. The reason I gave it only a 6 out of 10 is because the many battle scenes in the film are, by today's standards, quite unrealistic: we see almost no gore, with enemy soldiers simply falling down when shot. So anyone who has seen Saving Private Ryan or some other modern, ultra-realistic war film, will find it hard to take these battles seriously. But this lack of gore is also a selling feature. It means this film is appropriate for a much younger audience - fathers could watch this with their sons, to show them a piece of history. That said, the battles do still involve explosions, lots of shooting, and of course, soldiers dying, so they will still be too intense for the very young.

One other caution - while the language in here is pretty clean - no one takes God's name in vain - there is one or two uses of "damn" and "hell."
Posted by Jon Dykstra at 11:43 AM No comments:

Abby Johnson was raised pro-life but became the head of one of the United States’ biggest Planned Parenthood abortion clinics. In 2009 she left her job and walked down the street into the offices of Coalition for Life, a pro-life group that regularly picketed outside her clinic. She wanted their help; she wanted out; she wanted forgiveness.

This is an eye-opening documentary in two entirely different ways.

First, unPLANNED shows us how a young woman can be pulled into the abortion movement. When Abby Johnson went off to college she got involved with a man several years older than her. When she became pregnant and didn’t know what to do, this boyfriend had a ready “solution.” Soon after, when she came across a Planned Parenthood display on campus, she still told them she was pro-life, but it didn’t take much for them to sway her. She wanted them to be right; she didn’t want to think of herself as a killer. Soon she was volunteering at the abortion clinic, along with many others sincerely thought they were helping women.

The second eye-opening aspect of this documentary is the way it shows us how the pro-life movement, by God’s grace, won this woman over. Gracious volunteers who spoke the truth and were clearly motivated by love spent years talking with Abby, through the fence. One even brought her flowers! Then, in late 2009, she, for the first time, helped with an ultrasound-guided abortion of a 13-week-old unborn baby. Though she had been told that fetuses at this stage could not feel pain, she saw the fetus jerking and squirming to get away from the vacuum tube. Watching the child get ripped apart on the ultrasound screen brought her to a moment of horrifying clarity.

She didn’t know quite what to do, but only a few days later she was at the doors of Coalition for Life asking for their help.

Her story hit the national airwaves when the Planned Parenthood clinic, in what seems an attempt at intimidating her, sued her. Their case was thrown out of court, but it helped publicize Abby’s departure, and the story of a former abortion clinic director becoming pro-life was too good for any news organization to ignore. We don’t always understand the means by which God further his plans, but in this instance what Planned Parenthood intended for evil, God very quickly and very clearly turned to good: the news coverage allowed Abby Johnson to speak up for the unborn to a national audience.

While I would recommend this film to anyone over 12, I do want to add a couple cautions.
First, this is a fantastic pro-life resource, but shouldn’t be used as a theological one – many of the interviewees talk about God from a distinctly Arminian perspective, which isn’t surprising since many are undoubtedly Catholic (including Abby Johnson).

Second, as my father-in-law noted about the book this film is based on, it lacks an appropriate sense of gravitas. Though she acknowledges she sinned horribly, the true horror of what Abby Johnson was involved in isn’t really conveyed in the film. The reaction of her pro-life family, and pro-life husband to her abortion clinic work contributes to this lack of gravitas – they make it clear they disapprove, but their daughter’s/wife’s ongoing involvement in the murder of countless children doesn’t prompt them to anything more than muted expressions of disapproval. It hardly seems like she could be doing anything too wrong if this all the reaction she gets from her friends and family.

I’ll conclude by noting I’m being a bit overly cautious with these cautions and I hope this doesn’t leave you wondering if the film is any good. It is wonderful! What a story – praise God for the wonders He can perform! It is also a great resource for anyone involved in the pro-life movement, and to those who are not, but are starting to recognize that they really should be! I highly recommend it (and have already seen it 5 times!).

Posted by Jon Dykstra at 5:08 PM No comments: 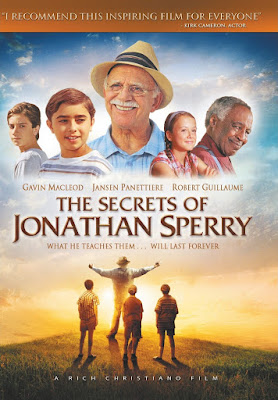 This is a critique of the insufficiency of random chance as any sort of explanation for the complexity of life. This is basically an Intelligent Design presentation, so it argues against evolution, rather than arguing for creation. Still, it makes a pretty compelling case that information has to come from somewhere, and that we have a lot of information - our programming for life - packaged inside us. So where did it come from? This is clearly a presentation intended to be palatable in public schools, so they don't answer that question with the obvious answer - God - but this answer is inescapable nonetheless.

There is a lot to chew on here, so you may want to watch it a few times to properly digest it all. Fantastic computer animation aid in making this a painless educational journey. I would recommend Programming of Life to anyone interested in the origins debate, including those that are already quite familiar - even they will find something new and of interest here. You can find out more at their website, ProgrammingOfLife.com, including previewing the book the documentary is based on, and you can watch the complete film below.