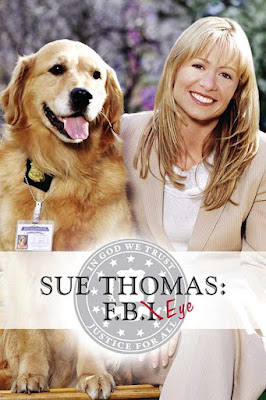 
Twenty years back when it first hit the airwaves, this sure was a crowd-pleaser in Christian households. Based on the real life of deaf F.B.I. agent Sue Thomas, it combined the intrigue of police investigations with the unique comic pairing of the courageous but somewhat naive Sue and her lovable but not-always-so-well-behaving hearing dog Levi. The shows were generally tame, but not lame; a Christian series where the acting might not have been Oscar-worthy, but was never cringe-worthy either.

In the pilot episode Sue starts her new job in the FBI and concludes that she was just a diversity hire, and isn't happy about it. But her lip-reading abilities soon catch the attention of agent Jack Hudson who realizes that Sue has just the skill-set their surveillance team needs.

When Jack Hudson first learns Sue can read lips, he challenges her to tell him what one of his colleagues 50-feet away is saying. It turns out he is making weekend plans with the woman he is sitting with. But, as Jack shares with Sue, that woman is not his girlfriend. This two-timing is a minor plot element, but makes what might otherwise be an all-ages show something better suited to older teens and adults.

I've only previewed the first episode to this point, but found it utterly charming, and look forward to watching the other 56 episodes. Canadians and Americans will be able to watch the pilot episode below (unfortunately, the video won't work outside of North America) and find more on Encourage TV on YouTube here (you'll have to use their search function to find the others).

You can also watch it for free on RedeemTV here, though you'll need to sign up for a free account. The advantage to doing so is that it is much easier to sort through the episodes there.

Posted by Jon Dykstra at 1:57 PM No comments: