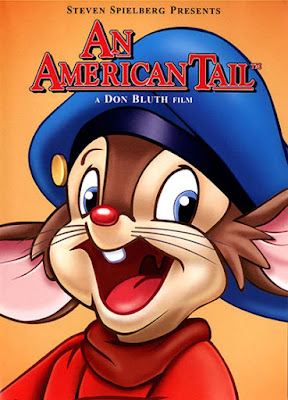 
This is the immigrant experience, set to music, and seen through the eyes of a 19th century Jewish animated mouse family who decide to come to America after they’d been driven out of their Russian village by rampaging Cossack cats.

I should end the review right there; what more do you need? But I can’t help myself, because this is as brilliant as it is utterly unique! After escaping the Cossack cats, the Mousekewitz family takes a slow boat to their new land, surrounded by fellow immigrants from other countries. All of them have sad stories to share, usually involving how a cat ate their papa, or mama, or in the case of one Irish lad, his one true love (and all that was left of her was her tail!).

After each story is shared the mice join together to sing of how much better they expect it to be in their new country:

They’re all so very hopeful, and that’s when the storm hits. Little Fievel, the Mousekewitz’s boy, is washed overboard and presumed lost, and his family is forced to continue on without him. Thankfully (I don’t think I could have taken it otherwise) Fievel has survived. He’s battered, but unbroken, and travels the rest of the way in a bottle, arriving only a short time after his family. Will he be able to find them? There are so many mice in New York! And it doesn’t help that they aren’t even looking for him.

Fievel soon discover that there are cats in America. Fortunately there are also mice here willing to fight for their freedoms. So it is, that Fievel, and unbeknownst to him, his family too, help with an audacious plan to force the cats onto a boat heading for Hong Kong. But even as they work on the same plan, Fievel and his family never quite cross paths. Fievel is making friends though, whether it’s a French pigeon helping with the construction of the Statue of Liberty, or a streetwise teen mouse who has Fievel’s back, or even a cat who loves broccoli a lot better than mouse burgers.

There’s a lot of cats chasing mice throughout the whole story, and these cats are mean and scary. That, along with a brief counter Fievel has with some creepy cockroaches, make this fare for children ten and up.

Also, theres’s a minor character, the politician Honest John, who always seems drunk. Fortunately, he’s onscreen only briefly, and only a few times.

I was struck by how this had, for me, the feel of a 1940s wartime flick. Just like in those films, this celebrates America as a beacon of hope. The darkness it opposes isn’t Nazis this time, but something not too different; An American Tail was made during the Cold War, when the USSR was at its most intimidating, and it’s no coincidence that the main characters are coming from an oppressive Russia to find opportunity in America. While the Mousekewitzs discover that the streets aren’t paved with cheese – that’s too good to be true – there were opportunities in this new land that didn’t exist in the old one. An American Tail is a surprisingly nuanced celebration of the immigrant, showing that it wasn’t easy for those early settlers, whether man or mouse.

So who’d enjoy this? I suspect it’s so unique, so unusual, that excellent though it is, it might not appeal to the whole family. A Jewish Russian American mouse musical? Yup, that is odd, and maybe even weird.

But it really couldn’t be more wonderful!