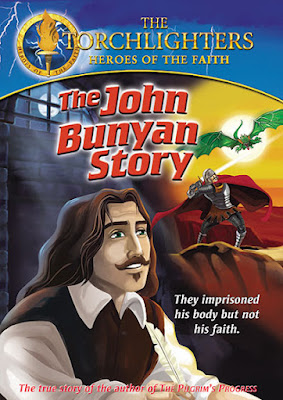 
What is likely the most influential novel of all time was written by a man of little education, though with a lot of free time on his hands. John Bunyan may have written his most famous work, The Pilgrim's Progress, during his 12-year stay in prison for preaching in an illegal church. For those that aren't familiar with it, the book is a metaphor for the Christian life, with a pilgrim traveling from the "City of Destruction" to the "Celestatial City" and along the way having to contend with all sorts of trials and temptations personified (like a giant named Despair, or a judge named Hate-Good). Bunyan, by his own account, was not a nice young man, so he understood temptation. And once he became a Christian, he paid a price for it, so he knew trials. And this animated account gives a great, engaging overview of it all.

However, the film does indulge in creative license, taking as literal the opening lines of The Pilgrim's Progress, where Bunyan wrote "...as I slept, I dreamed a dream. I dreamed, and behold, I saw a man clothed with rags..." They portray the book as being inspired by Bunyan's dreams during his time in jail, and while that might even be true, it's disputed when exactly Bunyan first started writing his bestseller, so the facts are harder to come by than it might seem here.

So one caution might be that younger viewers should be told not to make much of the little details, which may or may not be true.

The other caution concerns age-appropriateness. This is animated, so parents might think it is for little children. But a battle scene when the young Bunyan is a soldier shows a man next to him getting killed by a musket ball. The scene is made all the more dramatic when the distraught Bunyan cries out in grief, reaches for his now dead friend, and discovers that his own hands are now covered in blood. This wouldn't bother a ten-year-old, but some younger children will be disturbed. There's also a dream sequence with a dragon attacking Bunyan. Again, not overly scary by teen standards, but it could be a bit much for preschoolers.

I've rated this an 8, but that's only for an audience that's read Pilgrim's Progress – those that don't already know the book, won't be too interested in learning about the man behind it. But if you do know it, this will be an engaging half-hour's viewing. Our family, from eight all the way up, quite enjoyed it.

Watch it below for free (with some commercial interruptions).