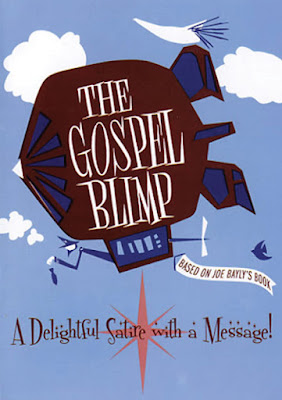 It may be 40 years old now, but this understated satire still ranks among the better Christian films ever made.

It begins with a group of enthusiastic Christians having a barbeque in their backyard, and discussing how they can evangelize the unconverted next-door neighbor. They all know the conventional ways of doing it, but they’re looking for something… special. As they’re relaxing, sitting back in their lawn chairs, a blimp flies overhead, and that’s when it hits them – that’s what they need to do! Buy a blimp so they can fly it over the neighbor’s house, and over the entire town, and throw down gospel tracks. That’ll get people’s attention. What a brilliant plan!

That they miss the obvious alternative is only part of the film's point, but it's this satiric take that makes this both cutting and memorable. Their plans just keep getting bigger and bigger!

The Gospel Blimp is based on a book of the same title by Joseph Bayly that cuts even deeper (and there was also a comic book adaptation that did so a little less so). What allows this version to be just as engaging four decades later is its still relevant point – that we make evangelism harder than it needs to be – and the clever way it was first filmed. This is home movie-esque, and as a home movie we don't expect car chases or explosions, and we aren't put off by the grainy film.

Like The Blair Witch Project famously did, the producers took what would otherwise have been a weakness – less than high definition camera work – and have turned it into a strength by making it a sign of authenticity: the home movie feel lets us know we're getting an intimate, up-close, look and this group's evangelistic efforts.

This would be a great short film to share with any group of Christian friends and then talk about afterward – it offers lots of fodder for discussion. You can watch it for free below.