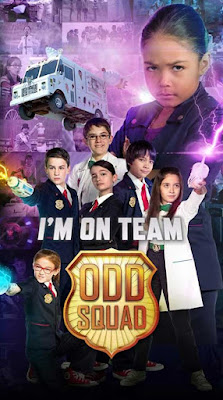 
Odd Squad is an organization founded to correct the strange, the weird, and most especially the odd, wherever they might occur around the world. The organization itself is odd in that it is run entirely by children and even babies.

There's an educational aspect, with basic math and logic used to solve most problems. There's also a James Bond vibe, with agents, cartoonish villains, gadgets galore, the science types who invent them, and there's a leader known only by her letter, "Miss O." But, of course, this being a children's show there isn't any of Bond's violence and sex.

Odd Squad, the TV show, has been in production for 8 years, which has resulted in child actors aging out of their roles. So since 2014, there have been three "seasons," each with its own set of agents. Odd Squad: The Movie involves the first and second sets teaming up for the first time (which was very exciting for our girls).

So who do they have to battle? Well, it turns out, nobody. A new rival adult-based agency, the Weird Team, is dealing with all things weird and odd so quickly that Odd Squad doesn't have any cases to solve. So the film begins with Odd Squad disbanding. How's that for an unexpected twist!

However, Weird Team may not be quite as effective as they first seemed. Their fixes are coming unfixed... or maybe they were never really fixed in the first place! Whatever the case may be, it's clear the world still needs Odd Squad.

There aren't any notable cautions for the film, so the only quibbles would be about the TV show that spawned it. In the 20 or so episodes we've watched so far (out of more than 100) one dealt with the number 13 and bad luck. The story was actually about addition – they were finding all sorts of ways that basketball players' uniforms could add up to 13 –and the bad luck was of a goofy sort, but we still hit the pause button so we could discuss the idea of luck with our kids. In a couple of other episodes, there was mention made about the organization being around for millions of years, which presumes the evolutionary time scale. But, so far, that's really it.

The film is goofy and creative, and especially fun because it had the two teams working together. While the target audience is in the 6-10 age range, it'll be a great one for a family movie night.

To get a feel for Odd Squad, here's an excerpt from the movie, with two agents dancing their way through a field of deadly lasers to some good old ragtime music (or you can watch this full episode from the show).