Adventures in Odyssey: The Knight Travellers 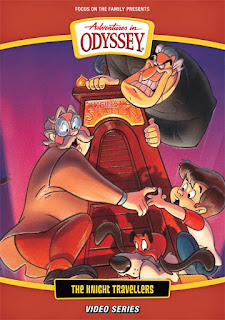 Back in 1987, Focus on the Family started a radio drama series for Christian families called "Adventures in Odyssey," and it is still running today, more than 900 episodes later. It also spawned 17 animated episodes, the first of which is The Knight Travellers.

It's clear from the start of the episode that viewers are expected to have some familiarity with the radio original, as main characters John Avery Whittaker ("Whit" for short) and his assistant, Eugene Meltsner, aren't really introduced. For those that don't know, Whit is a lovable grandfatherly figure and an inventor. In this episode, some bad guys have stolen his "Imagination Station" invention which Whit designed to allow people to travel back in time, at least in their imaginations, to find out what life was like back then. However, the bad guys have turned it into a "Manipulation Station" so they can use it to control people's minds and get rich. As regularly happens, Whit gets some pint-sized help, this time from 10-year-old Dylan Taylor and his dog Sherman (who aren't from the radio dramas).

If you are familiar with the radio show, then it won't surprise you that these videos can have some tension to them. In this episode, Dylan has to contend with a crocodile, a giant boa constrictor, and a smooth-talking, and iron mace swinging, evil knight. And in the next episode, Dylan and the new neighbor girl have an ongoing argument that continues on through the episode and ends in a hospital trip. In Episode 3, Dylan's disobedience leads to a runaway mower destroying some prize flower gardens. Everything turns out alright in the end, and, of course, lessons are learned. But the arguing, and moments of scariness, will be too much for some sensitive viewers.

The episodes are meant to teach lessons, so I want to spend a moment on the lessons being presented. There are a couple morals to the initial story, with the first being that true treasures are not found in toy catalogs or toy stores, but come from God. True enough. But the second moral of this story is, if not problematic, at least misdirected. Whit tells the main bad guy that:

"Our hope lies in something you can never control or conquer. Our _______"

If you would have filled in that blank with "Our God" then you may understand why I don't like Whit's answer: "Our faith." Our faith is conquerable – we wouldn't hold steady if it was just up to us – but thankfully what we can't do, our God can. Jesus is unconquerable. That's a point worth raising with your kids.

Also problematic, is the third episode, where Dylan is initially irresponsible, so the lesson here is responsibility. But what goes unaddressed is how Dylan, in an attempt to make up for past mistakes, risks and almost loses his life to save some bird eggs. This is presented as brave, but in treating his life as of no more importance than that of birds' Dylan is actually being irresponsible.

That underscores how, even though this is a Christian show, there is a real need for parental guidance and discussion while watching them – they can't be treated as "hit play, and walk away."

To this point, I've only watched the first five episodes, and found the animation and writing on par with Hanna-Barbera productions like The Flintstones or The Jetsons. While this is too childish for teens, parents who remember Adventures in Odyssey from their youth will enjoy this for the nostalgia, and their younger kids - those who can handle some tension - will too.

There were two "seasons" to the animation series, and while it doesn't seem too important to watch them in order, The Knight Travellers does introduce us to Dylan so it is probably the best place to start. In total there's about 7-hours worth of viewing.

You can see The Knight Traveller trailer below, and find the series on various streaming services including Amazon.