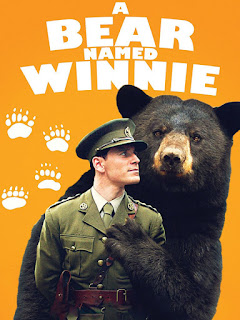 This is the (mostly) true story of Winnie, the bear that inspired A.A. Milne's much loved Winnie the Pooh books. While she lived most of his life in the London Zoon, many don't realize that Winnie was a Canadian bear. So it was very fun to learn how he got from the wilds of Canada to inside the pages of everyone's favorite children's story.

I think copyright concerns probably kept producers from using the words "Winnie-the-Pooh" but as the film begins, the connection is made, with an adult Winnie being watched by a man and boy who are unnamed, but unmistakable as Milne and his son Christopher Robin.

"Father," Christopher Robin asks, "why do they call her Winnie? It's a funny hame for a bear. I wonder how she got it"

From there we are taken back in time, and across the ocean to meet a group of veterinarians, enlisted in the Canadian army, riding the rails across the country on their way to the front lines of the First World War. Aside from the bear, the star of this piece is Harry Colebourn, and we're introduced to him just as he wins a sizeable pot of money from his fellow soldiers. But he's not rich for long, as at the next stop, in White River, Ontario, he sees a bear cub chained up. Colebourn uses his money to buy the bear and rescue it. But now that he has it, what is he going to do with it? When he takes the bear back to the train, his regiment adopts it as their mascot and it's named Winnipeg – Winnie for short – after Colebourn's hometown.

From then on we get to see both Winnie's story and the story of this veterinarian regiment.

The only caution concerns what one reviewer called the film's confusion about its target audience.

It's about the most beloved bear of all time, so wouldn't this be a perfect one for the kidlets? The pacing is gentle, with the tension being mostly of a kiddish sort involving Winnie getting into things she shouldn't, and owner Colebourn, and his friends, trying to chase her down before they all get into more trouble.

But if this is for children, then why the repeated scenes with the mentally unbalanced, and at one point drunk, general in command? And if it is for kids, then what were producers thinking when they had the young vet Macray, distraught by the battlefield deaths of his friends and animals, grabbing a gun and running off to his death? The violence is muted - we don't see any blood and gore, even in the midst of fallen men and animals and we never see or hear Macray get shot. The violence is of the sort you might find in a Hallmark film (in fact, I wouldn't be surprised if this is on the Hallmark Channel). But you don't kill off charming characters in a children's film.

So parents need to understand that, despite some appearances to the contrary, this is not one for kids. Or at least not kids who are of the age that they are being read Winnie-the-Pooh stories.

Who would enjoy this? This would be a nice one for mom and dad on a night when they want something quite calm. It is a unique chapter in Canadian history, presenting not just a bear's story, but also showing some of the First World War from a Canadian perspective. There's humor, hijinks, and also a little educational content along the way so all in all, it ranks as quite a good TV movie.