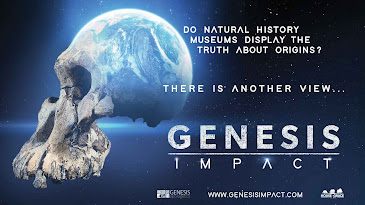 This is a very good...something. The topic matter is plain enough – human origins – but what's less clear is whether this is a documentary or drama.

The beginning is standard documentary: apologist Ray Comfort, just off camera, interviewing college students about their views on evolution.

But when the camera pulls back we discover these interviews are actually a smartphone's 3-D holographic projections being viewed by a teen boy sitting on the edge of his couch (presumably a decade or two into the future seeing as there's no app for that quite yet). When mom wanders by to put away groceries, he shares his doubts about whether God really did create in just six days. "What if they're right, and we're wrong?" he asks, "I mean, the scientific evidence for evolution is pretty overwhelming. What if God...used evolution?" To answer his questions, mom takes us through another scene change, shifting back 20 years to modern day when she was still in school, listening to an origins lecture at a Natural History museum. When the speaker concludes and most of the other students leave the auditorium, the young mom-to-be stays behind to question, and eventually debate, the scientist/lecturer. That's where we stay, along with a few student stragglers, listening to a well-reasoned critique of the lecturer's evolutionary presentation. While Genesis Impact hardly has a plot, it still has plenty of drama as evolution and creationist go head-to-head over the next hour.

Genesis Impact shouldn't be evaluated as a drama though. The acting is fine – solid enough not to get in the way, and better than many a Christian drama – but the young lady is far too knowledgeable, and the evolutionist lecturer far too reasonable (readily conceding her every good point) to be realistic. Fortunately, the filmmakers' goal isn't realism. They wanted to present a challenging, highly educational lecture on a pivotal topic, and they wanted to deliver it in a really unique and entertaining manner. Mission accomplished!

While the topic matter is the sort you might want to share with an atheist friend, that this is a staged debate – an acted out debate – provides the "out" any skeptic would take to dismiss it entirely, arguing that a real evolutionist would have had better responses, or wouldn't have conceded so many points. So one caution would be that this isn't one to win over an unsympathetic or hostile audience.

What makes it valuable is that the creationist critique is a really good one. Evolutionary proofs aren't so overwhelming as it seems, with guesses built on assumptions, stacked atop beliefs. Secular science presents their conclusions as being unassailable, though sometimes the hype is as much the fault of the media as the scientists. Even when researchers couch their guesswork with phrases like "could be" and "might" and "probably" the media is likely to trumpet "Evidence of life has been found on Mars!" in 36-point front-page headlines.  Still, the same sort of unwarranted certainty can be found in Natural History displays, and in university classrooms, so evolutionary arrogance isn't simply a mainstream media invention.

Who should see Genesis Impact? It's best suited for bible-believing Christians who are interested in, or troubled by, evolutionary accounts. It'll be an encouragement and could serve as a leap-off point for further study. The depth of the material discussed also means this is best suited for college-age and up.

You can watch it for free below, and visit the film's website to dig deeper: GenesisApologetics.com/Impact.