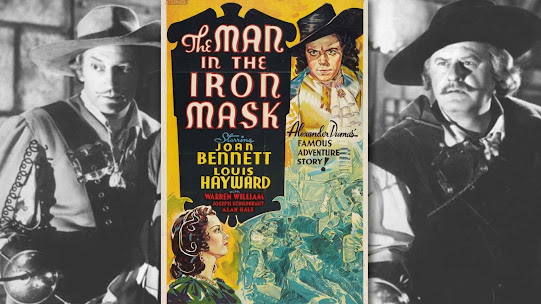 Drama
1939 / 112 minutes
Rating: 6/10
Based loosely on the Alexander Dumas story of the same name, it takes place 20 years after Dumas' more famous The Three Musketeers novel. The opening is the French palace, where the Queen has just given birth to son Louis. The King now has an heir so his court and the whole country are caught up in celebration. However, back in the Queen's chambers the doctor and nursemaid are still at work because, so it turns out, the Queen was carrying twins. When the younger prince Philippe is delivered, the news is kept secret, for he presents a problem: so long as Philippe lives he is sure to become a tool that unscrupulous sorts will use against his older brother. The King and his closest advisors all agree, this boy will be the cause of civil war.
So what's to be done? Baby Philippe is packed off with the King's most trusted friend and the greatest of the musketeers, D'Artagnan, to raise as his own son. The boy is never to know who his true father is.
Fast forward twenty years and the older Louis has been king since he was five. Indulged since that young age he has grown to become a wicked tyrant, so much so that he thinks nothing of arresting his father's closest friends, including D'Artagnan. When Philippe gets arrested too, the king discovers their startling resemblance. Knowing no reason for it – the birth of his brother has been kept a secret from him too – he decides to use Philippe as a body double. He's learned his unhappy subjects are planning to assassinate him, and he sees in Philippes's appearance an opportunity to redirect the danger to this other! However, there are now two in the palace playing the part of the King, and that is one too many. As the title shares, there's an iron mask involved at one point, but I'll stop here lest I give away too much.
CAUTIONS
The twists and turns caused by one actor playing two roles confused our youngest. But hitting the pause button to get her back up to speed was all it took to help her. There is some swordplay, but of a near G-rated sort. At one point a man is whipped, just off-screen. We see the whip hit him, not directly, but in the shadows on the wall, and our sensitive girls wanted to know if the whipping was actually happening...and we could assure them it was not.
Another consideration is that the King has both a wife-to-be and a girlfriend on the side. His lasciviousness is never shown on screen – the most anyone does in this film is get kissed on the forehead – but parents will have to explain how her presence tells us what kind of flawed character the King is.
CONCLUSION
I don't think anyone in our family would give this two thumbs up, though I think we'd probably all give it one – all of us found bits of the film we quite enjoyed. My wife likes to learn about historical settings, and appreciates being exposed to a famous story she hadn't heard before. The kids were intrigued by the whole identical twin angle with one actor playing both parts. All of us loved the sword fights. But I'll also add, my girls were a bit freaked out by the scenes with the man in the iron mask, and my wife was really disgusted by the evil Louis. So this isn't the sort of black and white film you should pitch to people who aren't used to black and white films. However, for those of us raised on such fare, this is a solid outing.
While there doesn't seem to be a movie trailer available online, you can watch it for free by clicking here (though it might have commercials).
Posted by Jon Dykstra at 4:17 PM