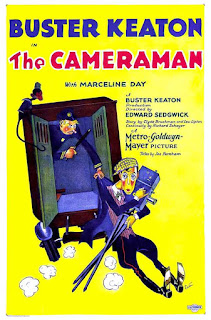 Buster Keaton is a down on his luck tin-type cameraman. The film takes place in the 1920s, when photos are still a rarity and Buster makes his money taking portraits of passersby on the street for ten cents each. The story begins when Buster has a chance encounter with Sally, the receptionist at a newsreel company's office. To impress her he trades in his tin-type camera for a hand-cranked motion picture and heads off to find some news to film.

It takes Buster a bit of time to get the hang of things but his failures are entertaining, and Sally appreciates the effort. However, just as she's warming up to him, and Buster is figuring out how to run his camera, the villain of the piece – an already established news cameraman – arrives to break up the not-yet-a-couple. Nothing is ever easy for Buster!

There are a few cautions for this film that make it less than ideal viewing for the youngest viewers.

Buster first encounters Sally when a huge crowd crushes them into each other, with Buster stuck behind her, his nose buried in her hair. This takes the ridiculous love-at-first-sight trope, and turns it into a slightly creepy love-at-first-smell. Fortunately this is only a brief bit.

There is one "naughty" joke, involving Buster and Sally on their first date to a public swimming pool, Buster ends up in an oversized swimsuit. To impress Sally he heads to the diving board and, of course, ends up diving right out of his suit...though he doesn't immediately realize. To solve his dilemma he divests a woman in a large of swimsuit dress (right down to mid-calf) of her accompanying swim-pants, which he then wears on his way out of the pool. It's best not to think just how he pulled off that stunt (and the film doesn't spend any time on it).

Younger viewers might be shocked at the sudden apparent death of a small monkey that Buster falls on (but later we discover the little guy is okay). A scene in which a police officer tests Keaton's reactions by hitting his knee – and Buster returns in kind – might also be distressing to younger viewers who know that's not how you treat policemen!

MGM loved this film so much it was required viewing for all its comedy filmmakers. And no wonder! Like Keaton's other films, this one abounds in stunts and visual jokes, but it probably has the very best – though most abrupt – ending of them all.

So my take is, The Cameraman is a fun film but recommended only for older family members who understand that Buster Keaton is not always to be imitated.