The man who shot Liberty Valance 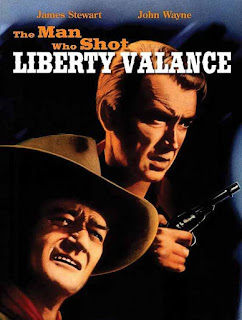 What does it mean to be a man? In this classic Western, Hollywood offers up two answers.

Tom Doniphon (John Wayne) is a successful horse rancher living just outside the town of Shinbone who prides himself on not needing anyone and not fearing anyone. He solves his own problems, and figures that everyone else should do the same. Self-reliant - that, in his mind, is what makes a man a real man.

Ransom Stoddard (Jimmy Stewart) is a lawyer, newly arrived to Shinbone who starts a school for both children and adults when he discovers that most can't read. He wants to bring law and order to town, but via the law book, and not the gun barrel, and that makes him naive. But he's also principled and caring, and that, in his mind, is what makes a man a man.

To put both these models of manhood to the test, we have Liberty Valance, a bully and a killer. He and his gang do whatever they want, and none of the town folk dare stop him. Doniphon could stop him... but that would be solving other people's problems for them. Ransom wants to stop him... but he'll need more than just his law books.

This is an all-time classic that everyone will enjoy...if they have the patience for it. It starts off slow, and the pacing throughout is far more relaxed than anything a modern viewer is used to. If it were made today, they would cut at least a half hour. But, if you go in understanding that, then this will be a grand film.

It's the nature of Western to have some violence in them, but in this one a lot of it occurs offscreen, though just barely so, as when Ransom is whipped. Onscreen we see a manic Liberty striking furiously, but Ransom is just below the frame, so we don't see the blows land. A couple people are shot, but without any real gore.

The only language concerns would be one use of "damn"

If your children regularly watch TV then the pace of this film will be too slow to keep their interest. But otherwise this would be a classic worth sharing with the family including children maybe 10 years old and up. It's good fodder for a discussion about the difference between Hollywood's ideal man, and the type of man God calls us to be in passages like Ephesians 5:21-33.