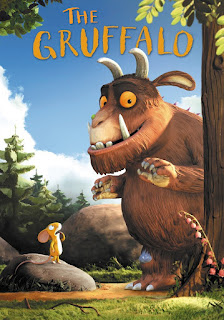 How can a mouse meet up with a hungry fox, snake, and owl, and live to tell the tale? It helps that he has a monstrously big friend who is just about to meet him. And a fox, or a snake, or an owl, wouldn't dare eat a small mouse who has such a big friend!

But...what if they found out what the mouse knows: "There's no such things as a Gruffalo"?

This short film, based on the book of the same name, is a clever tale about a mouse who thinks his way out of trouble. It is beautifully rendered, visually and musically, with the only concern being that everyone wants to turn this little mouse into a little morsel. So in our household the pause button had to be used a few times to calm some anxious viewers. For those under eight, especially if they don't watch much TV, there is a little bit of tension here. In fact, kids under three might find it just too scary.

But it does all work out in the end, and reassuring any little ones of that might help them make it through.

So, two thumbs up for this short, fun, and clever story.

There is a sequel, The Gruffalo's Child, about the title character heading off to search for the "big bad mouse" that so terrified his father. But it loses the charm of the original because now it is a father who lies to his child, rather than, as in the original, a mouse lying to predators. While we can justify lying to predators it is quite another thing for a parent to lie to their child. Also, the moody music, and the uncertainty about who we should be cheering for (the Gruffalo child, all on his lonesome searching through the woods, or the mouse that he is, basically, hunting?) make this one a good bit scarier than the original. That's why our family is going to give it a miss.