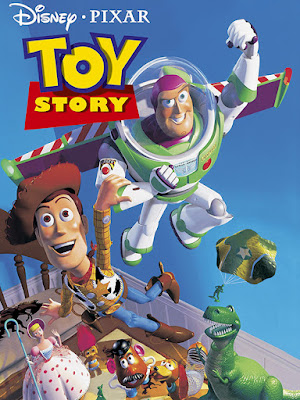 
Twenty-five years ago Toy Story was groundbreaking: it was the first feature film to be animated entirely by computer. Since then computer animation has greatly improved, so what's allowed Toy Story to continue on as a family favorite isn't the look – solid though no longer amazing by today's standard – but the story.

Woody is a toy, a Western sheriff with a pull string on his back that makes him say "Reach for the sky, pardner!" He and his fellow toys live in their owner Andy's room, and while they are limp and lifeless when people are around, they spring to life (as every child has always suspected) the moment we leave. As the story begins, the toys are nervous because it's Andy's birthday. That means new toys are on the way, which could mean that some of the old toys get relegated to the bottom of the toy box.

The brilliance of Toy Story is in the toy casts' very different personalities: we've got a timid Tyrannosaurus Rex, a wise-cracking Mr. Potato Head, a loyal Slinky-Dink Dog, and a flirtateous Little Bo Peep lamp. Shucks, even the Etch-a-Sketch is quite the character, trying regularly to "outdraw" Sheriff Woody.

The biggest personality of them all is the newest arrival. For his birthday, Andy has gotten a Buzz Lightyear – a spaceman action figure – that replaces Woody as his favorite. Woody is jealous, but what really drives him nuts is that Buzz doesn't even understand that he's a toy. Buzz thinks he's landed on an alien planet, and that the other toys are the friendly locals. Woody is normally a pretty stand-up toy, but in a bout of exasperated jealousy he gives Buzz a shove. He meant to bump Buzz off the bureau, where he'd get stuck (and maybe forgotten for a while) in the gap between the bureau and the wall. But instead, he sends Buzz right out the second-story window into the bushes below.

Woody, more concerned with what the other toys will think of him than actual concern for Buzz, tries to rescue the spaceman. But things just go from bad to worse and they end up in the next-door neighbor's house, in the clutches of Sid, a boy whose parents don't supervise him like they should. Why is it dangerous to be around Sid? Because he blows up his toys... and now Woody and Buzz maybe next!

While there aren't major cautions,  there are a lot of little nits that could be picked. For example, when one toy talks about how much he trusts Woody, Mr. Potato Head takes off his lips and presses them to his butt – adults understand, though my kids missed it. A bunch of alien toys in one of those coin-operated toy dispensers view the claw that comes down as "our master" and speak of it in a worshipful manner. They're basically a cult, and make for a weird, if fortunately brief, addition.

There's also the overall tension throughout. This is intended as a kid's film, but there were parts where we had to hit the fast-forward button because it was just too much for our 8-year-old. Sid, in addition to blowing up his toys, also splices different toys together, so when Woody and Buzz are trapped in his bedroom, they get surrounded by his freaky creations, including the creepiest toy you'll ever see: a mute Mechano spider topped with a  shaved doll's head. Buzz and Woody discover that they're all friendly, but I think even adults could get the kreebles in this scene. Then there's Sid's toy destruction: he blows up one, and his dog tears another to bits. When you consider that toys are people in this film, that's quite something to include.

In 1995 I saw this in the theater with my college friends and we all loved it. But what I thought then was little kids' fare that adults could like too, is actually too scary for the very young. After watching it again with my family, I'd describe it as for 10 and up...though if you are willing to hit the fast-forward button here and there, younger kids can enjoy it too. It's basically G-rated, with some PG moments.

This is an odd couple/buddy film, and adults will realize from the start that Woody and Buzz are destined to become the best of friends by film's end. But even if the end is obvious, loads of humor and action make it a fun journey, and one your kids will likely share with their own kids a couple of decades from now.