Free film: The Marks of a Cult 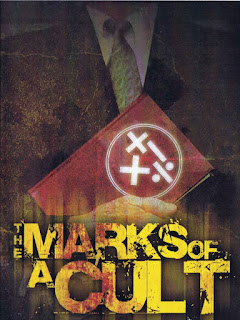 
How would you define a cult? Some think of them as being deadly, like the 900 followers of Jim Jones who, in 1978, committed suicide en masse by drinking cyanide-laced kool-aid (this is the origin of the phrase “drinking the kool-aid“). What this documentary focuses on are religious groups that have some connections to biblical Christianity, but which have departed so far from it, that they are worshipping another God.

One of the film’s objectives is to give Christians an easily understandable way of spotting those departures. And to make it memorable, host Eric Holmberg uses the four common math symbols: + – x ÷. As he explains it, “A group can be classified as a cult when they:

These math symbols are then used as the documentary’s four “chapters” and serve as logical breaks for any who might prefer to digest this 2-hour documentary in chunks.

Holmberg explains that the first sign of a cult is that it will add to God’s Word, “relying on some new, so-called revelation. either new scriptures, or by the discovery of some new interpretive key to the Bible that has somehow been hidden from the historic church.” But why would such additions be needed? As Dr. Curtis Crenshaw notes: “If anything is contrary to Scripture, it is wrong. If anything is the same as Scripture, it is not needed. If anything goes beyond Scripture, it has no authority.”

Cults will also subtract from the “triunity of God.” Sometimes this involves denying the Holy Spirit’s deity, but more often, it involves a denial of Jesus as being fully God.

Another sign of a cult is that they multiply the works needed to be saved. This springs directly from the subtraction or undermining of Christ’s deity because, as Jerry Johnson highlights, when Christ is no longer God (or at least fully God), then his sacrifice will no longer suffice. And then Man will have to step in and do his own “share.”

“To downplay the divinity of Christ is to ultimately to surrender the doctrine of justification. Now, why is that? We must remember that God is holy, holy, holy. He is a thrice-holy God. Our mildest sin offends Him greatly….God doesn’t wink at our sin. God is offended by it. He doesn’t even want to look on us because we are not reflecting the character of being made in His Image. And when we think about that, and think about the fact that Christ came as deity to die in our place, that’s because our sins are an infinite offense to the infinite nature of God, and therefore an infinite payment had to be made, and we couldn’t make it. So to take away the deity of Christ does what? It opens up the door. You have got a satisfaction that isn’t a full satisfaction. It’s a partial satisfaction. And therefore, something else has to be added to it. And that’s what the cults always do. None of them believe in justification by grace alone through faith alone. They always add some works to salvation. Christ’s work is not complete, because Christ is not diety.

A fourth sign of a cult is that they will divide their followers from God so that their first loyalty belongs to the group or to the group leader, rather than to God.

The Marks of a Cult is a lot of things: a history of how some of the biggest cults began; a rebuttal to some of their aberrant theology; an explanation of how they have different definitions for key theological terms like grace and justification; and a primer on the beliefs that Christiandom hold in common. It is also entertaining – this is education made, if not easy, then at least engaging.

But it’s also important to mention what this is not: this is not a film you’d show your Mormon or Jehovah’s Witness friend to convince them they are worshipping a false god. This is a film for Christians, intended to clarify the conflict more than argue for the historic Christian side. That makes it a great introduction to the topic of cults. Those who want to go deeper can turn to the resources suggested throughout the film, including the likes of Dr. James White’s The Forgotten Trinity and Dr. E. Calvin Beisner’s God in Three Persons.

Overall, The Marks of a Cult is an outstanding documentary, and what’s even better, you can watch it for free below!