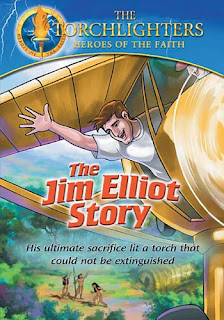 You can find a preview of these films at their website www.torchlighters.org and watch them for free at RedeemTV.org (though you will have to sign up for a free account).

The William Tyndale Story
32 min; 2005
Rating: 6/10
The strength of this film is in its simplicity. The vast cast of characters featured in the live-action version is, in this animated retelling, cut down to only the half dozen most important. So now even children will be able to follow the story and learn about how Tyndale translated the Bible into English at the cost of his own life.

The Jim Elliot Story
30 min; 2005
Rating: 6/10
In 1956, Jim Elliot and his four friends seek out a group of Ecuadorian natives who have never heard the gospel. The missionaries are murdered for their efforts. Years later, when the men’s wives also seek out the natives, and forgive them, their example serves as a powerful testimony to the truth and power of the Good News, and many of these same natives are then converted. Though this is a cartoon it should definitely be previewed by adults as some scenes – specifically when the missionaries get speared – will be too intense for some children (I would say this is for kids 10 or older)


The Richard Wumbrand Story
30 minutes; 2008
Rating: 6/10
I knew of Richard Wurmbrand as the man who founded Voice of the Martyrs, an advocacy group for the millions of Christians being persecuted around the world. But before he began speaking out for the persecuted, Pastor Wurmbrand was tortured himself, in his homeland of Romania. The Communist government intimidated other Christian leaders into silence or complicity. They wanted Wumbrand to go along too, but at a government-sponsored event Wurmbrand took the opportunity to publicly denounce the state's suppression of the Bible and their denial of God. His stand buoyed up the courage of many other Christian leaders in attendance. It also landed him in jail. As the film makes clear, what he had to endure was dreadful – physical torture and long stretches of solitary confinement – however there too God provided him the strength he needed.

We in the West have no idea what Christians in other parts of the world have to endure, and, because we haven't been so sorely tested, we also have little idea of how God provides all that we need. Of the three films here this is the one I most want to show my own children... when they get a bit older. I want them to see how this man relied on God, and could trust God to provide him all he needed, even in the most desperate of situations.
Posted by Jon Dykstra at 3:08 PM