To Save A Life 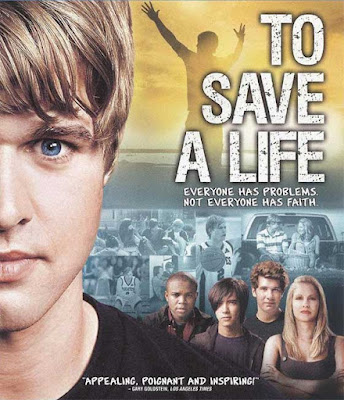 To Save A Life is about teen suicide... and also premarital sex, abortion, underage drinking, cutting, bullying, divorce, divorce's impact on children, adultery, drug use, gossip, and Christian hypocrisy. It's a realistic look into the teen party culture, and consequently we see some students smoking pot, a couple about to engage in sex, lots of drinking, and a lot of immodest dress.

This description might make the film seem too much like today's typical teen fare - partying kids, and the fun they have. But there is a twist; To Save A Life is also about being willing to stick out instead of fit in, being willing to reach out, to walk our talk, to take responsibility for our sins, to be willing to forgive, and to take God and what He says in his Word seriously.

High school senior Jake Taylor is the star guard on the basketball team. He has what everyone wants: the looks, the friends, the prettiest girl in school. Roger Dawson is on the other end of the social spectrum. He wonders if anyone would even notice if he just disappeared. In despair he walks into school and pulls out a gun in a crowded hallway. As he swings the gun barrel towards his own head, only one student speaks up - Jake - but it's too late. Roger kills himself.
That's how the film begins, but what the film is about is how Jake reacts to Roger's suicide. It haunts him because the two of them used to be friends. But Jake ditched Roger soon after they both started high school, when Jake got in with the popular kids. Roger needed a friend. Jake was too busy pursuing the "high school dream" to care.

Guilt-ridden, Jake first turns to alcohol, and then to sex to try to forget. But those are only short-term diversions. Eventually he ends up in a nearby church, attending the youth service. But here, too, he isn't finding what he hoped - the group is full of youth who aren't walking their talk. He knows many of these same church kids are smoking pot during school, or are part of the same party scene he's running from. In disgust he shouts out a challenges to the group: "What is the use of all this if you aren't going to let it change you?"

Sure, some of the kids aren't genuine, but some are, and Jake's angry challenge stirs things up. They start meeting for lunch at school, and start reaching out to others on the outside to come join them. They befriend the friendless.

When this was first released it was quite a controversial film in Christian circles. Not many Christian films earn a PG-13 rating. But while the film's realistic portrayal of teen depravity means this is not a film for children, this "grit" has been used with care. Restraint is evident.

Still, there are reasons parents might want to preview this film before watching with their teens. In addition to the intense topic matter, here are some more specific cautions to consider:
This is a complex movie because of the sheer number of issues it takes on and because it takes on so much, it does breeze over some issues, and deals with some others in an overly simplistic way. This includes God's gospel message. Viewers might leave with the impression that God's gospel message is meant as good news for this life - that if we follow what He says, things will start going better for us here and now. This is the "Gospel as a self-help guide" error common to many Christian films and novels. It isn't explicitly stated in To Save A Life so I don't want to dwell on it. The truth is, things do often start going better for us when we follow God's will. His law can act as a fence around us; when we stay within its bounds we are safe from many things that might otherwise harm us. At the same time, serving God can come at a cost - think of the many martyrs around the world. And in the high school setting, especially in a public school but even in Christian ones, serving God can cost you friends and popularity. That's a point that To Save A Life touches on, but also glosses over.

How do Christians do high school differently?  As To Save A Life shows, often times we don't do it differently at all - we're involved in the same drunkenness, the same rebellion, the same quest to fit in. Our peers matter to us more than our parents, and more than God.

But what if we lived as lights? What if God, and what He thought, mattered more to us than what our friends thought of us? What if we did unto others as we would like them to do unto us? Then we might do high school quite differently. To Save A Life explores what that difference might look like, and while the film is gritty at times, it is a great resource for parents and their teenage children. It is an enjoyable film, but more importantly a challenging one. Parents: use it to challenge your kids.