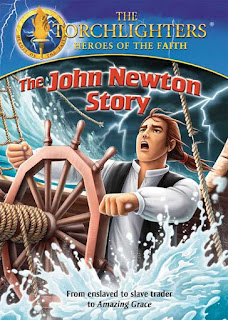 
We know John Newton (1725-1807) as the former slave ship captain who repented and then wrote the amazing hymn Amazing Grace. In this Torchlighters episode, we get to hear the rest of his life story from the man himself. When an anti-slavery bill is brought to the British Parliament, one of the members goes to Newton to ask him to speak out on the issue. In response, an old Newton starts to share his dark history.

It is a story of constant rebellion – this was a sailor so salty that the other sailors complained about the filth coming from Newton's mouth. It is also a story of a transformation wrought over many years: when Newton first became a Christian he stayed in the slave trade, going on to captain two slave ships for three voyages, transporting thousands of slaves in shameful conditions. This, it turns out, is why the Member of Parliament (MP) has come to Newton: since Newton captained slave ships as a Christian, the MP thinks he can convince Newton to speak out in favor of slavery. The MP has another reason to think Newton might help his cause: after attending the church that the older Newton now served as a pastor, the MP had never heard Newton preach against slavery.

Newton realizes that not only can he never speak for slavery, he must now, finally, begin to speak against it... no matter what it might cost him and his church. His congregation was made up of many who had ties to the slave industry.

While the brightly-colored animation style might have parents thinking this is all-ages viewing, the topic matter means it is not so. The toughest scene is right at the start, where we're shown a happy African village, and then the slavers come to kill and steal. It's brief, lasting only a couple of minutes, serving as the visual background to a parliamentary speech given by Christian politician William Wilberforce on the evils of slavery. Man-stealing – a crime God punishes with death (Ex. 21:16) – is so brutal there's no way to entirely mute the wickedness of it, so parents will need to watch the first few minutes to best judge whether their children will be able to handle it. I wouldn't show this to my under tens.

There is one picture of Jesus briefly shown, in a book the Member of Parliament is reading.

I'll also note the video leaves viewers with the impression that a young Wilberforce and the older Newton both saw the end of slavery in Britain. They did, together, help end British involvement in the slave trade – that happened in 1807 – but it wasn't until 1833, many years after Newton's death, that the slaves in Britain were finally freed.

My favorite part was the William Wilberforce speech, which bookends the presentation, beginning and ending it. Would that we could one day hear a Christian politician give such an impassioned speech in Parliament in defense of the unborn! This is one to watch with the family, or with a class, and discuss how we can and must rise to the defense of the unborn, never being afraid to raise their plight in the public square.

You can watch The John Newton Story for free at RedeemTV.com though you will have to sign up for an account. Check out the trailer below.