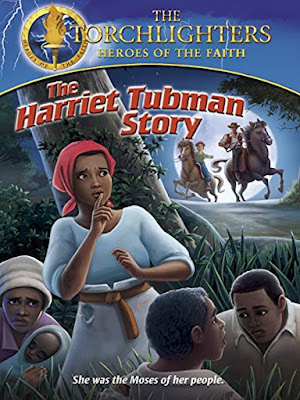 
This is an action-packed overview of Harriet Tubman's life (c. 1822-1913), an escaped former slave who helped other slaves flee the American South to live free in the Northern US and Canada. We get introduced to the "Underground Railroad" during Tubman's initial escape. No trains were involved; this railroad was simply a series of homeowners (or "conductors") along an established escape route, who were willing to hide fleeing slaves, and take or direct them to the next railroad "stop." Sometimes slaves would travel by horse and cart, hidden among the hay or goods on the back, and other times they would have to trek through the woods with a guide, or maybe on their own.

After gaining her own freedom, Harriet went back more than a dozen times to help her family and others slaves also escape. She gained the nickname Moses because she was bringing her people to "the Promised Land." Her willingness to take these risks was because of her love for the Lord and trust in Him. In the going and coming she would constantly pray to the Lord, and the Lord kept her and her charges safe.

This is a children's half-hour video, so there isn't time to have any sort of lengthy discussion about slavery. But I still think it problematic that there is no distinction made between US slavery and the slavery God allows in the Bible. That's a problem because I suspect most children watching this will leave with the impression that slavery is entirely condemned in the Bible... and then be unsettled when they discover otherwise.

Another theological concern happens when a fellow slave comments on Harriet's constant prayers, Harriet explains that she's just doing as the Good Book says, to "pray without ceasing" (1 Thess 5:17). She keeps praying because "I'm hoping [God] will just get tired of hearing me and set me free." One of my daughters compared her approach to that of the persistent widow of Luke 18:1-8 when faced with the unjust judge. But does God need to be worn down? There are problems with Harriet's understanding of God here, so parents should hit the pause button and discuss the reasons we are to ceaselessly pray.

While this animated production mutes the horror of slavery, the lesson would be lost if it did so entirely. So there's trauma to contend with, starting with the opening scene where an older Harriet is being chased and shot at as she helps her parents escape. More traumatic still is the next scene, where a juvenile Harriet witnesses the break up of a slave family – their master has sold two of the daughters, and the girls are being taken away while they cry out for their weeping mama.

That means that even as this is a powerful introduction to Harriet Tubman, it'll be too much for preschool children to handle, and others, even up to 10, may need to be guided through with a few timely uses of the remote's pause button. This would be best for a family movie night when your kids are a bit older.

You can watch The Harriet Tubman Story for free below.