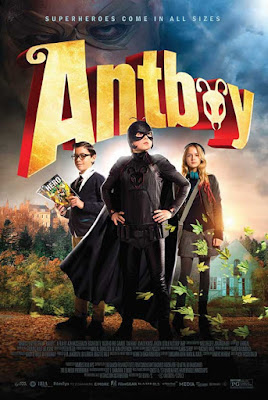 Pelle is a 12-year-old boy who goes entirely unnoticed at his school...except when he ruins a couple of bullies' fun with a well-thrown apple. Then their attention turns to him, and he has to dash down street after street before ducking into the yard of old Mrs. Gæmelkrå. The bullies are too scared to follow, but why?

Well, it turns out some mysterious stuff has been going on at the Gæmelkrå house, involving some interesting insect experimentation. When one of those experiments – a tiny Hercules ant – bites Pelle he takes a Peter Parker-like turn and gains the proportionate strength of an ant.

But before Pelle can become the hero Antboy, he needs a little help from a friend or two. Wilhelm, a comic-book fanatic, is the first to spot Pelle's new abilities and offers to help as both costumer and coach. It's once they settle on an outfit that Antboy is then born!

Of course, you can't have a superhero movie without a supervillain, and it's the scariness of Antboy's nemesis, the adult "Flea," rather than any of the comic book type violence, that would make this film too much for young children.

Common to superhero movies, there is also a damsel in distress. Pelle 6th Grade crush, Amanda, gets kidnapped by the Flea and has to wait patiently for rescue. While I like the courage of Pelle – guys have to learn to be brave – as a dad of daughters, I'm not so wild about how Amanda is so very superficial and helpless (she's no Proverbs 31 sort!). Her twin Ida (they don't look alike but are in the same grade) is a very different type of girl, and while not the ideal role model either, she is a significant upgrade, working with Antboy at one point, to rescue Amanda.

One caution would concern a brief instance of potty humor: the ant-powered Pelle makes use of a school urinal only to discover that, like the ant, he can now secrete acid. There is no immodesty but we do see a stream of acidic pee, which does a number on the urinal. He later uses this "power" to break open a lock on a door.

The is also one instance of the use of "damn" (by the bad guy).

This is a movie about a quiet boy who sees his superpowers as a chance to be popular but realizes that friendship is quite a different and better thing.

Antboy was filmed in Danish, but its English dubbing is such that kids might not even notice (even as parents most certainly will). It owns its cheesiness and while not a spectacular example of the genre, is silly fun for families that can deal with the peril and tension.  Overall I would recommend it for 10, or maybe even 12 and up.

There are two sequels, but neither measures up to the original. You can watch the trailer below, and watch the film itself for free here.