FREE FILM: 2081: Everyone will finally be equal 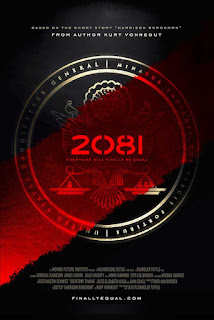 In 2081 a “golden age of equality” has been ushered in by the “Handicapper General” whose job is to assess everyone’s abilities and, if they have any advantages, to then assigns them “handicaps” to take them away. In the film’s opening scene we meet George who, being a little stronger than most, is sunk down in his easy chair by the heavy weights he’s been assigned to sap his strength. He’s also outfitted with earphones that hit him with piercing sounds to make it impossible for him to use his higher than average IQ. Meanwhile, his wife Hazel sits comfortably on the couch, knitting. She hasn't been outfitted with any handicaps because she's been deemed to have no advantages.

So they are equal. But is it an equality we want to have? Hazel and George are now just as fast, just as strong, and just as able to do math as one another. But this is an equality of the lowest common denominator. To bring this equality George's gifts had to be diminished until he was at Hazel's level. And for the government to bring about this type of equality, it had to treat them quite differently: Hazel is free, while George is in chains.

Surely this isn't what we mean by equality, is it? There must be some other, better sort?

While the film doesn't really direct us to the equality that is worth pursuing, the Bible does. In passages like Leviticus 19:15, Ex. 23:3, 1 Timothy 5:21, and James 2:8-9 we're pointed to a type of equality that involve treating all alike, not favoring the less advantaged over the rich, or the rich over the poor. Instead of endorsing 2081's equality of outcomes, God tells us to extend an equality of treatment.

2081 is so short I don't want to give any more of the plot away. But if you're looking for a great conversation starter, this is a fantastic film to watch and discuss, though be sure to do so with a Bible in hand. You can watch the trailer below, and to watch 2081 for free, follow this link (you do need to sign up to their email list, but they won't spam you, and you can always unsubscribe).


[SPOILER ALERT: the questions below do give away some more of the story.]