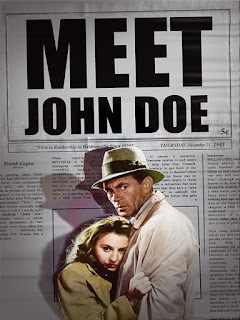 
Director Frank Capra is probably best known for It’s a Wonderful Life, but that only became his best-known film later on. He actually had 13 films nominated for Oscars, as Meet John Doe was in 1941.

As in Wonderful Life, Capra’s Roman Catholic upbringing is evident in the general Judeo-Christian ethic running through Meet John Doe. That doesn’t mean Capra's films are always theologically orthodox – we know angels don’t get their wings when a bell rings – but there is a moral depth to many of them, including this one here, that is almost unknown today.

Set in the depression, the story revolves around a reporter, her editor, and a derelict, and the politician who is trying to take advantage of them all. When a round of layoffs at The New Bulletin leaves columnist Ann Mitchell out of a job, she decides to go out with a bang. For her last column, she submits a letter from an unemployed “John Doe” who is threatening to jump off the roof of City Hall on Christmas Eve to protest society’s degeneration.

The letter is actually a fake, concocted by Mitchell to express her own disgust, but it causes a sensation. Readers flood the newspaper with letters, some of them marriage proposals from concerned women, some job offers, but all wanting to know, “Who is John Doe?” When Mitchell’s editor finds out the letter is a fraud, he hires her back to prevent the public from learning about the deception. Then he takes things one step further, hiring a derelict former baseball player (played by Gary Cooper) to take on the role of Doe.

What starts as a deception soon takes a positive turn. When the paper’s new “John Doe” begins making public appearances his simple speeches encourage a helping spirit among his listeners. John Doe Societies spring up spontaneously to enable neighbors to help one another. Doe becomes the leader of a huge, helpful movement… that’s built on the lie of his false identity. Things come to a climax when a conniving politician threatens to expose this lie, unless Doe endorses him.

Some have called this a Christian film, even though it came out of Hollywood. That claim is made because God's second greatest commandment, "To love your neighbor as yourself" (Mark 12:31) undergirds the whole movie. It's worth noting then, and sharing with any others in the family watching it with you, that the film largely divorces the Second Greatest Commandment from the First. We hardly hear about God, and the need to "love the Lord our God with all your heart, soul, and mind and with all your strength" (Mark 12:30). That makes this more humanist than Christian – Man-focused, rather than God-focused – but there is one scene which shifts it in a Godward direction, and least in part. To avoid spoilers I'll share the words, but not tell you the speaker or context:

"You don’t have to die to keep the John Doe idea alive. Somebody already died for that once, the first John Doe, and He’s kept that idea alive for nearly 2000 years. It’s He who kept it alive in them [the people of Earth]. And, He’ll go on keeping it alive forever and always.”

A powerful profession, but isn't it curious how Jesus is not actually mentioned by name? And this reference also doesn't talk about the real reason Jesus came, and what He accomplished. It presents Him more as an example to follow than as the One who suffered and died to take away the punishment for our sins. So... this is a near miss, but not really a Christian film.

That said, it is a film Christians can really enjoy, understanding the truth of what is said here, and being able to fill in for ourselves what was not.

At just over 2 hours long, the pacing is slower than us modern folk are used to. But just be sure to make a little extra popcorn: this is a classic for a reason.

That said, this is not the first movie I'd show anyone not already used to black and white films. Also, with suicide an ongoing topic throughout, this is not a film for younger viewers...but it wouldn't catch their attention anyways. So who should see it? This is a film for anyone who wants to peek into another culture and another time, to learn what they thought was important, and admirable, and worth fighting for.

Meet John Doe is in the public domain, so you can watch it, for free, below.