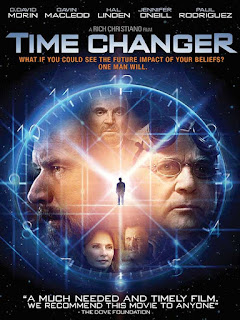 In the year 1890, seminary professor Russell Carlisle proposes teaching morality to the masses but without making mention of God. He reasons to his fellow professors that even if people don’t become Christians it would be a good thing if they were at least taught that stealing was wrong.

If that sounds familiar, that's the point. Director Rich Christiano, in his boldest and best film, is taking on the Christian trend of publicly defend God's Truth – about the unborn, or marriage, sexuality, gender and more – but without mentioning God Himself.

While we'll have to wait a decade or two to see how that approach plays out for us, Professor Carlisle gets his feedback in a much more immediate fashion – a colleague uses a time machine to send the professor one hundred years into the future. Upon arriving in present-day America, Carlisle sees that morals founded on anything but God have no foundation at all, and are just dismissed as opinion.

While the film has a serious point, the time travel duck-out-of-water angle allows for some comedy too. However, Carlisle isn't as shocked by modern-day technology as he is by modern-day spiritual malaise. He's surprised to meet someone who works on Sunday and doesn't attend church regularly. And when he's taken to a movie theater, he finds the film shocking, and not because of the violence or sex. As the time traveler runs from the theatre he shouts:

Only caution I could think of is one use of the word "gosh."

This is a solid movie with an important and powerfully presented Christian message. From simply an entertainment perspective, it gets a 7, but its deeper point means this is a cut above most other Christian fare.

Because there isn't much action, and maybe a few too many philosophical discussions, this won't keep the attention of younger kids. But for mid to older teens, it could be a fantastic one to watch and discuss with parents. You can watch the trailer below, and rent the film online at various places.