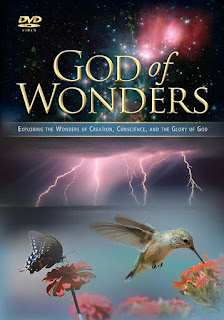 
This is a nature documentary that starts at the stars, and touches on just about everything else: lightning, squids, hummingbirds, seeds, snow crystals, DNA and butterflies are just a few of the highlights.

That’s both the strength and the weakness of the film. Some of this footage is as remarkable as anything seen on the Discovery Channel, or a National Geographic special, but each time a creature is investigated, we learn only enough to know we would really like to learn more… and then we’re on to the next bit of nature. But there is a method to this madness. The theme of God of Wonders is straight out of Romans 1:19-20: God has revealed Himself in the wonder of his creation. If we reject God, we can’t claim we did so out of ignorance – God, through his creation has left us “without excuse.”

The pacing is a little slow, with maybe a few too many talking heads, compared to the nature footage, but once we're about ten minutes in, it gets rolling. That does mean, though, that even as this would be a great film to watch with a questioning friend – it could be a wonderful evangelistic tool – it won't work if that friend isn't at least a little patient.

For families used to watching documentaries, this will be another fun one to check out. The breadth of this presentation means there's sure to be something new to learn for everyone watching, from the youngest to the oldest.

You can watch it for free in two different ways. It is available in "chapters" on the film's own website GodofWondersvideo.org/chapters.htm. The advantage to watching it in chunks is that it'll create the breaks needed for good discussions. But if you want to watch it for free in one go, you can find it (probably for only a limited time) here at the YouTube channel Christian Movies.

Check out the trailer below.