WARNING: There are F-bombs galore in this trailer

In 2012 Pastor Douglas Wilson gave a public lecture on the contentious topic of sexuality God's way. But it wasn't simply a public lecture: his event took place on the campus of a large university and was advertised well ahead of time, giving campus LGBT groups and their supporters time to arrange protests and arrange to fill the auditorium seats. In addition, this wasn't just any university campus: it was Indiana University, home of the Kinsey Institute, where the infamous sexologist Alfred Kinsey helped launch the Sexual Revolution. For a talk on God's thoughts about sex this was as hostile a setting as could be had.

His talk, and all the hysteria and hoopla that surrounded it, is the centerpiece of director Darren Doanne's new documentary The Free Speech Apocalypse. Doanne uses the event to tackle three related subjects: 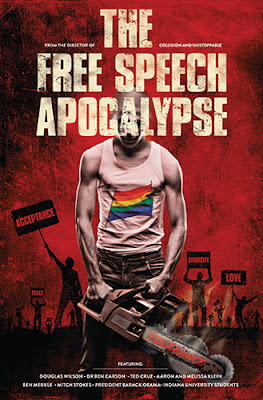 Other related topics are also tackled, including the American Civil War. In the US it is a near universal belief that this was a good and just war because it ended slavery. But it also resulted in 600,000 dead - that was the tradeoff that liberals don't consider. A conservative might ask (as Wilson has), considering this high cost, might there have been a better, less bloody way to end slavery? After all, everywhere else in the West slavery was ended peacefully. It's a good question, but, as happened to Wilson, one liable to get you labelled a racist and a slavery lover.

American presidential candidate Ted Cruz appears in the film for less than a minute, but his interview highlights how even conservatives and Christians can forget to consider the tradeoffs. Concerning the Civil War he says it "was absolutely a just war" but concerning abortion, "We have the ability to change this, and to change this without a war fought in the streets." So he understands that war would be an unsatisfactory tradeoff for today, but won't even consider whether that might also have been true for the Civil War.

And there are other cautions. The F-bomb is put to regular use by students, and these occurrences are not bleeped out. The one thing I found surprising was the selection, by the director, of some backing music for a ten-second segue that also included multiple f-bombs. That was an unnecessary addition but, fortunately, a very short addition. There are also a few brief shots of homosexuals and others prancing about in short shorts, and one line-drawn diagram shown for a few seconds that includes a depiction of a naked male butt.

Finally, and this isn't really a caution, but more an advisement, there is nothing here related to Douglas Wilson's stance on Federal Vision.

The pacing of this film left me gasping - it is a frenetic charge through this, that, and the other thing. It is an enormously ambitious film but because it tries to fit so much in, it might leave viewers exhausted by the time the credits role.

But it is worth putting in the effort. Few Christians are both able and willing to beard the liberal lion in his den, and it is fun and encouraging to watch Wilson venture forth. Here we get to see a brave man standing up, outnumbered, but not outmaneuvered because he stands on God's Word.

This film is also a must-see because it shows what is coming and what we are up against. As the Left continues to marginalize Christians, it may well be that in some circumstances no matter what we say or do we will not be able to win the debate. And not because of any weakness in our position, but rather because the other side has no interest in discussing. They'll want to meet our words with their shouts, or their claims of victimhood, or even their fists.

However even then our light can shine. If our words are shouted down, our demeanor can stand in sharp contrast. In Wilson we see a joyful warrior, secure in the knowledge that God has already won. This is how we need to be.

You can watch this online or buy a DVD copy at FreeSpeechApocalypse.com.

Posted by Jon Dykstra at 3:15 PM No comments: