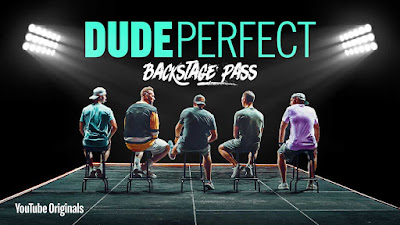 In 2009 some college friends, calling themselves the "Backyard Stuntmen" videotaped each other trying crazy basketball shots – behind the back shots, roof shots, hitting-a-hoop-driving-by-in-the-bed-of-a-pickup-truck shots – with each guy trying to outdo the last. Then they posted all their makes to YouTube, shared the link with family and friends, and then headed off to bed.

They woke up the next morning to find out they had been featured on Sports Illustrated's website and their video was getting hits by the tens of thousands. So they followed up that one with another. Ten years later the five friends, now called Dude Perfect, are still making videos and their viewers number in the tens of millions.

In this documentary the Dudes are giving their fans, old and new, a peek backstage at their 2019 live tour. And, in segments interspersed throughout, we also get the backstory on the ten years that preceded it: how the Dudes first met, why they all clicked, and even how they almost stopped before they really got going.

All five Dudes – Tyler, Garret, Cody, Coby, and Cory – are professing Christians, and while that isn't as obvious in their trick shot videos (except, maybe, in how family-friendly they are), it comes out clearly in Backstage Pass. One example: as the Dudes are about to head out on tour their family and friends come together to pray for them.

The very same ingredients that make their videos so popular are all on display in the documentary: amazing trick shots, over-the-top excitement, loads of humor, and good friends enjoying each others' company.

Cautions
The only content-related caution worth sharing relates to the "Rage Monster" that Tyler plays in a number of the videos, and on the the live tour too. The joke is that sometimes Tyler just can't control his temper and then he will, usually in a creative way, destroy something big. It might involve taking a pickaxe to a skidoo, or throwing a 4,700 piece LEGO Star Wars Imperial Destroyer off a second-story landing. Adults will be able to deduce that when the Rage Monster rampages, what he is destroying is likely already headed for the garbage heap. But when the Rage Monster destroys the Dudes' hardwood basketball court kids won't know water damage meant there were already plans in place to pull it up – they'll just see an adult acting like a child having a tantrum. So, even though the Rage Monster only has a limited role in the documentary, mom or dad might want to hit the pause button to let kids in on his backstory.

The only other caution isn't one I'd want to make too much of, but will still mention. These five Dudes show a lot of admirable traits in this documentary: they love their wives and their children, show respect to their parents and grandparents, and show love for each other. They also demonstrate industry, creativity, and hard work. But to some of their young fans they might seem to be five adults who have never had to grow up – the so-called "Peter Pan" syndrome. If any of our kids are under the impression they can play their way into millions, that's a course we want to correct. Fruitful work is a way to glorify God, and we should share with our kids that while the Backstage Pass shows some of the behind-the-scenes work, there's a lot more that gets left out because, like a lot of hard work, it would be boring to watch. But whether seen or unseen, our children need to know that hard work is key to the Dudes' success.

Conclusion
This is really all-ages viewing, keeping the attention of kids as young as 4 or 5, and while I haven't tested this on anyone over 50, I really can't see anyone disliking it. If you want to kick back for a dinner-and-a-movie family night, this should fill the bill.