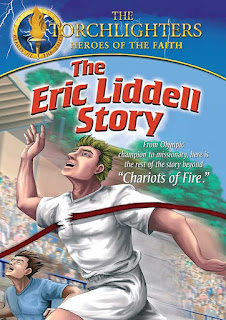 Eric Liddell is best known for the stand he took to not compete in the 1924 Olympic 100-meter race. He was among the United Kingdom's best chances at a medal, but he didn't want to run because doing so would require him to run in a heat on Sunday. Despite enormous pressure to compromise for the sake of his country, he still refused, pointing to the 4th Commandment's call to "remember the Sabbath Day, to keep it holy." His country was important to him, but it came a distant second to his God.

Eventually, a different sort of compromise was struck, which had Liddell run in the 200 and 400-meter races instead, winning a bronze and a gold. His firm convictions, and his outstanding athletic performances, were the subject of the 1981 film (and Oscar winner for Best Picture) Chariots of Fire. However, Hollywood indulged in a bit of artistic license. They made it seem as if Liddell only found out about the Sunday heat on the boat ride to the Paris Olympics, but the truth, as shown much more accurately in this animated video, is that Liddell knew months before.

While both film and video cover Eric-the-athlete, this video covers his later years too, as Eric-the-missionary. Liddell was born in China, to Scottish missionary parents, and while educated in Scotland, actually spent most of his life in China. He returned there after the Olympics, serving as a missionary from 1925, until 1943, which is when the Japanese invaded. He could have fled, and he did send his family away, but Liddell stayed to continue telling the Chinese about God. That cost him, as he ended up in a Japanese internment camp, but even there he remained a faithful witness until his death in 1945, likely due to a brain tumor.

This would have gotten at least a 7/10 if not for the choice the creators made to have Chinese characters speak broken and stilted English – their inarticulate language skills make them look a little dumb. Liddell was raised in China, which means his Mandarin was likely excellent, and for important conversations, they likely would have all used the language they all knew well, and his Chinese friends could have been shown speaking clearly and articulately in their native language. Maybe I'm wrong. Maybe they were all trying to learn English, and so that's the language they all spoke all the time, some better, and many worse. But I doubt it, and that's why I knocked a star off what is otherwise a solid account of a faithful and fascinating man.

Also, as noted earlier, Liddell does die in a Japanese camp, and while that is not depicted, if you have some sensitive younger souls, you might want to give them a heads up early on, so that ending doesn't come as a shock.

This is more educational than entertaining, but I think families could enjoy watching this together – that it is a true story does make it compelling. To say it another way, this might not be the sort of video your kids will ask mom and dad to put on, but if you start it going, and the whole family is watching together, I don't think there will be many complaints. So watch this with the family and be inspired by a man who knew that God was worthy of all honor, and most certainly came before fame and before his own safety.

You can watch The Eric Liddell Story for free below, though with quite a lot of commercial interruptions. For an ad-free presentation, you can sign up, also for free, at RedeemTV.com.