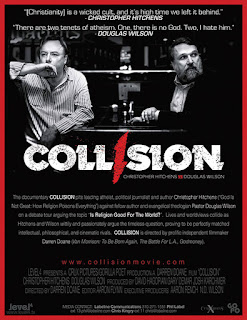 The genesis of the film started back in May of 2007 when leading atheist Christopher Hitchens and Reformed pastor Douglas Wilson were asked by Christianity Today to dialogue on the question “Is Christianity good for the world?” Their wrote six exchanges which were printed in the magazine and then, in 2008, compiled into a book. When the two men headed out to do an east-coast book tour, filmmaker Darren Doane tagged along. He captured their exchanges and interactions, both on stage in formal debates settings, and as they conversed over a pint of beer in the local pub. The end result is the most entertaining and enthralling debate you will ever see on film.

But its appeal is not the reason this is a must-see film. You should see Collision because:

So what is presuppositional apologetics? And how does it compare to the other, evidential approach?

Evidential apologists figure if we present the evidence – enough of it, and the right sort – people will follow the facts and come to realize that there is indeed a God. The problem is, facts are always interpreted and there is no agreeable common “neutral ground” that both sides can meet on to examine those facts. Present someone with information about the stunning intricacy of the human eye and they’ll fall back on their worldview – their presuppositions – to tell them how to understand this information. A Christian will look at the eye and acknowledge it as evidence of a great and wonderful Designer while an atheist will understand it instead as evidence of millions of years of evolution, since something this amazing couldn’t have just sprung up overnight! Confronted with the same evidence, they come to opposing conclusions because sin taints even our intellect – even our reasoning – so evidence can be twisted to support two radically different worldviews.

Presuppositional apologetics delves into the assumptions – the presuppositions – that underlie every worldview. When, in Collision, Hitchens accuses God of being a tyrant for ordering the death of the Amalekites (Deut 25:19), Wilson asks Hitchens to provide, from his atheistic worldview, a grounds for being upset. If we are just “matter in motion,” as the atheist worldview contends, what reason is there for Hitchens to care what happens to Amalekites? Hitchens makes repeated moral claims, and Wilson repeatedly shows his atheistic worldview gives him no basis for claiming anything is wrong, or anything is right. While Hitchens has debated a throng of other Christians it’s only Wilson, and his presuppositional apologetics, that’s given him pause.

We can learn from Wilson and use this same approach to properly answer the theistic evolutionists in Christian circles. Like Wilson, we need to cut to the very core of the debate and address their presuppositions – we need to ask how evolution can fit with Christianity when it requires a mythical Adam and Eve, millions of years of mutations and mistakes, and Death before the Fall?

This is a film some will love, and others might find too loud (the producer has shot music videos in the past, and that influence is felt here in the driving, beat-y soundtrack), but the meat of what’s discussed, and the example that is set in the discussing, will be valuable for all ages and all interests. Would that everyone would watch this one!

And you can watch it on Facebook, for free, here.