The Sparky Chronicles: The Map 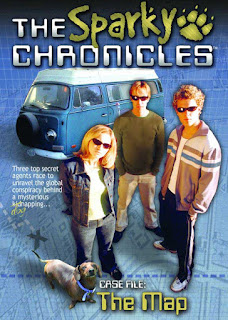 When their beloved Sparky is dognapped by the infamous international criminal known only as "The Clip," three college-age friends – Ethan, Jeffrey, and Christina – vow to find their pooch, no matter how long it takes. We join up with the search three years in – that's 21 doggy years! – and despite a Volkswagon van full of advanced tracking technology they still seem no closer to finding their four-legged buddy.

Sparky Chronicles is a Christian spy spoof, with sting operations, tranquilizer darts, explosions, and one chase scene after another. These aren't high-speed chases, mind you – and at one point the villain gets away by walking at a brisk trot – but that's the point. The pounding music, the quick cuts between the determined pursuers and their frantic prey, and then the shots of the speedometer needle slowly edging past 35: as spoofs go, they're pretty much nailing it.

So what makes this tweenish tale a Christian one? Well, during their long fruitless search the three friends come to realize it would be really helpful if they had some sort of guide to help them know which way to go. And when they happen upon a map that The Clip has left behind, Christina makes mention of how the Bible is the same sort of thing for life: a guide that tells us what's right and true. That's the lesson being taught, but unlike what happens in many a Christian production, this is an almost subtle presentation. Sure, they explicitly spell it out, but they don't beat kids over the head with it.

I'd recommend this for tweens, but younger kids might enjoy it too. And while this isn't going to be mom and dad's favorite, it'll be more interesting for them than some other children's fare. The only downside is that while things are set up for a sequel, there isn't one.

You can watch it for free below.