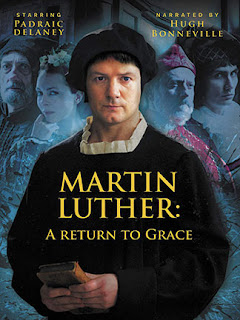 
What makes this a must-see is its unique mix of drama and documentary. Other great Luther documentaries exist, but the most engaging of “talking heads” can’t really grab the attention of a broad audience. I have seen even children enjoy one of the many dramatized accounts of his life, but drama can’t go into the same depth as a documentary – an actor can show us Luther’s despair or his joy, but they can’t depict the greatness of God’s grace, so, in this genre, it goes largely unexplored.

A Return to Grace is a docudrama – half documentary and half drama, making good use of the strengths of each. There are learned theologians to give us the background and explain the Scriptural debates that occurred, and there are also elaborately set and well-acted scenes from Luther’s life. I would guess it is a near 50/50 split. Pádraic Delaney’s Luther is very believable (and maybe second only to Niall MacGinnis‘ 1953 portrayal), speaking volumes with not just his tongue, but his grimaces, smiles, and silences.

I’ve probably watched at least a half dozen Luther films, and I’ve never seen the chronology of Luther’s life depicted as clearly. There are also explanations offered here that are left as mysteries elsewhere. Have you ever wondered why the Pope didn’t just crush this monk early on when he was still seemingly insignificant? The answer shared here is that the Pope didn’t want to make an enemy of Luther’s prince, Frederick III, because the prince was one of the seven electors who would choose the next Holy Roman Emperor. The Pope had no direct say in that selection, and if he hoped to have any sort of influence at all, he would need to be on the good side of the electors. God so set the scene that the Pope had to act cautiously and with restraint and couldn’t just burn Luther at the stake.

While I was familiar with only one of the theologians interviewed (United Reformed professor Carl Trueman), they all had some great Luther gems to share. James Korthals, a professor at Wisconsin Lutheran Seminary contributed this one about Luther’s view on vocation:

“The  farmer out in the field pitching dung is doing a greater work for God than the monk in the monastery praying for his own salvation.”

This was, at the time, a revolutionary idea of vocation. Even today, many seem to think that minister and missionary are the true God-glorifying jobs, and all else is second best. In saying all jobs could be done to God’s glory, Luther presented all fruitful work as being worthy of respect.

This is one of the ideas highlighted in the film’s alternate title: Martin Luther: The Idea That Changed the World. The story here is first and foremost about Luther rediscovering the gracious nature of God, but it is also about Luther’s influence as it impacted people far beyond the church door, and about the ripples that continue to be felt even today, and even in the secular world.

I have no real cautions for the film. I was a little concerned when a Roman Catholic Cardinal, Timothy Dolan, made a few brief appearances. But he doesn’t say much of anything, and even concedes that Luther’s rebellion was understandable against that old corrupted Roman Catholic Church. He might be implying that today’s Roman Catholic Church is different, but he isn’t given the time to make that case.

Return to Grace‘s drama/documentary combination draws viewers in without sacrificing depth. I’ll add that this still isn’t one for preteens, but for adults, and teens who are on their way, this will be a fascinating presentation of the man, and what he learned about our great God. So don’t save it for Reformation Day – it’s free to see now (though with some commercials).