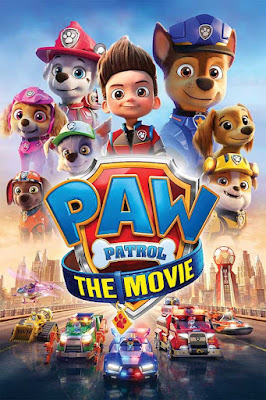 While our kids had never seen the TV series this is based on, we'd all seen enough of the PAW Patrol lunchboxes, toys, and commercials, to understand the premise: talking puppies, each with their own expertise, team up to help wherever there's a need. Puppies ensured they had cute covered and our daughters hooked, but was this going to be good enough to keep the parentals awake?

It turned out, yes – there was more than enough action and intrigue to keep me bright-eyed the whole way through. It even opened with a bang (and a screeeeeeeech, and an "oh no!"): a semi-truck driver narrowly misses a baby turtle crossing the road, but his emergency maneuvers have him veering all over the road and crashing right over the edge of a bridge, leaving driver and truck dangling precariously over the bay hundreds of meters below. It's as tense as a G-rated film can be, and had our daughters on the edge of their seats waiting for the rescue pups to spring into action.

What I most appreciated was when the story headed to Adventure City where a new cat-loving, dog-hating politician had just won the mayor's race... but only because the other contestant had to drop out. There's some political satire here, as the power-mad Mayor Humdinger tries to transform the city into his own vision of utopia, which, of course, goes disastrously. I don't know if the writers were purposely trying to mock big government but, regardless, they did a good job, as everything the arrogant mayor touches goes comically amuck.

A major subplot has PAW Patrol's top dog, Chase, struggling with a crisis of confidence after he makes a mistake during a rescue – that's the story's drama. Comic relief comes from all directions, maybe most notably in the form of a sassy new Patrol member, named Skye.

A heads up if you have an adopted child: Chase's struggles are due in large part to a traumatic experience in the city right before he was rescued and then adopted by Ryder, the team's only human member, so if your son or daughter had traumatic experiences before their adoption, this might hit them too close to home. I'll also note, this is an action-packed movie, which makes it exciting, but maybe also a bit much for some younger kids. Other than that, the only caution I caught would concern a "wedgie drone" as seen in the trailer below. It's just 15 seconds of questionable silliness, the end result leaving the mayor pantless, though wearing long boxers. There's nothing indecent in this scene, but the film could have been improved by its absence.

I was struck by just how much good old-fashioned fun this film was from beginning to end. I've read a review where this was said to come out of a "lightly Christian" worldview/morality, and I get why they would think so. I don't know if the producers were Christian, but they sure could have been. While this is just fluff – there's nothing all that deep here – there's also no poison pill mixed in with the cotton candy. It's just fun fluff all the way down.

I'd recommend this for the 8-11 crowd – it is a children's film. But for a first viewing, this could be one for the whole family. Older teen children won't like it nearly as much as their younger siblings, but even if the film doesn't grab them, they should get a kick out of all the little ones' giggles and gasps.