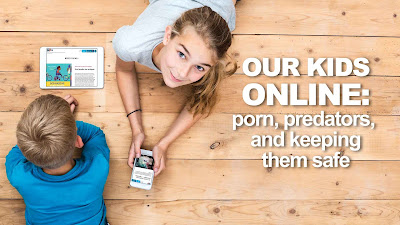 Our Kids Online begins with a wake-up call: kids aren’t just seeing graphic, dehumanizing pornography online, many are now imitating these acts, and even filming themselves at it. That got my attention.

It also got me wanting to turn the documentary off right there. It’s too much, too dark, and I’d really rather not hear about it. The producers must have anticipated that feeling because right then, flashing across the screen, they shared the famous challenge, commonly attributed to Edmund Burke:

“The only thing necessary for the triumph of evil is for good men to do nothing.”

As one of the filmmakers noted, “Just hoping our kids won’t be exposed is not an option….It’s not a case of if they see it; it’s a case of when.” So it was time to man up, keep watching, and trust that the promise in the documentary’s title – that I was going to learn how to keep my kids safe – would be born out. And by film’s end, I was glad I stuck with it.

Filmmakers Rob and Zareen Cope are a couple of New Zealander parents who didn’t want to tackle this topic either. But then their kids started pressuring them for more access to the Internet. And because they wanted to keep them safe, the Copes started investigating what the online dangers were, and what could be done about them. That quickly left them feeling overwhelmed.

Then they started doing what documentarians do: as Zareen explains it: “We got in touch with some of the world’s leading experts in this field and we hit the road.” As we, the viewers, follow along, we get to listen in on some pretty insightful, sometimes devastating, and always eye-opening conversations.

The Copes sum up another big difference as The Big 3 A’s of accessibility, anonymity, and affordability. Whereas pornography in the past was limited to magazines sold in corner stores, the advent of the iPhone in 2007 means that kids now have 24/7 access on their phones and also tablets and even gaming consoles, from the privacy of their own bedroom, and for free. Pornography has always been a problem, but it’s these 3As that have made it the epidemic that it is today.

Another problem actually involves how wonderful and helpful the Internet can be. As Rob Cope puts it:

“We’ve taught an entire generation to just jump online when one has a question. It’s brilliant. But what happens when their curiosity about bugs fully blooms into the curiosity about sex, and they type in ‘sex’ into Google?”

Consider also that it isn’t just what our kids might stumble across, but who – the thousands of sexual predators online. In one of the film’s scariest moments, a mom created two Instagram accounts, one in which she posed as a 15-year-old, and the second as an 11-year-old. Within an hour seven adult males had contacted her. This scene drove home the point that parents need to know where our children are when they are online. And for parents who don’t feel comfortable monitoring their children’s every online move, Russ Tuttle has this response:

WE SHOULD PLAN FOR OUR KIDS BEING CURIOUS ABOUT SEX

This is shocking, but the point is repeatedly made that this should also be expected. Parents who think that just because they have “good kids” they’ll be immune from pornography have forgotten what it was like to be a kid. Rob Cope notes:

“Boy’s testosterone levels skyrocket between 900% and 1,000% from the ages of 10 to 14 right when…professionals around the globe are seeing a massive increase in [sexual] assault. It’s the worst possible time to give them unfiltered access to the Internet. And it is the exact time that we do.“

Pornography is a far bigger problem than what parents faced when we were kids, and our children desperately need our help.

So what can parents do? The Copes list “four main ways to keep our kids safer online” and it is worth noting they say safer rather than safe. Not only do we want to do what we can to protect them from exposure, we need to equip them with what to do when it inevitably happens. The Copes encourage parents to:
To put it another way, we need to be “learning, talking, updating technology, and staying involved.”

One suggestion they offer for how parents can get educated is the website ProtectYoungMinds.org. Others that could be listed include the Christian organization CovenantEyes.com which, in addition to their monitoring software, offer a fantastic blog, and many free, very helpful e-books. And a specifically Reformed resource (though not free) can be found at SetFreeCourse.com.

Some parents might find it disturbing to think about talking to our kids at 5, or 6, or 7 about pornography. That’s what I was thinking – I mean, can’t we just let kids be kids? But as I saw my kids hanging out with children in the neighborhood who had their own phones it became clear I had to get them prepped. As Protect Young Minds' Kristen Jenson put it:


“There were a lot of people who were like, ‘What, talk to a seven-year-old about pornography?!?’ And I’m like, ‘Well, 7-year-olds are on the Internet, right? I mean, they are on their devices….Then we have to warn them. Just like you warn a child about running out into the street.’….It’s important to talk to children earlier about sex so that you can give your version. You can teach them your ideals, your values about sex…. Sooner is safer. When you begin a conversation with a young child you are not ruining their innocence. You are simply giving them information that they need to be safe in the world that they live in.”

“We’ve all been trained as kids, what if I catch on fire? Stop, drop and roll. We know that, from just being trained on that. What’s the stop drop and roll when you see pornography on the screen? Turn off the monitor, run and get mom, dad, and just leave this place, and they’ll come and help fix it.”

The two filters they recommend are Safe Surfer and Circle, both of which are designed for ease of use – even non-techy parents should be able to manage them. For monitoring older children’s devices they suggest Bark and Covenant Eyes.

Kids might push back against mom and dad tracking where they go online, but as Todd Olson says, “This is not a trust issue; this is a put your seat belt on issue.” It’s simply what parents and kids need to do to be safe.

TALKING WITH OTHER PARENTS

We can get monitoring devices and filters for our own homes, but our kids are going to venture outside those doors. What can we do then? Zareen Cope shared that for her younger kids, they would talk to the other parents before arranging play dates.


“…we check in with the parents to find out what filtering and rules they have in place around devices and internet usage. It felt really weird at first but…as parents it’s our responsibility to protect our kids regardless of how uncomfortable that may feel. What was awesome was that once we explained…about what we had learned other parents were really receptive to our request to have devices put elsewhere while the play dates took place. A lot of them, like us at the start, had no idea about all these dangers. We know a lot of parents that are now keeping devices out of bedrooms, in a communal area during meal times and while charging.”

How about older teens? Their friends also have phones, and they themselves are growing in ability and knowledge, so if they want to get around any protections you’ve put in place, they probably can. That’s why it is important to keep talking with them. We need to communicate that we are in this together, and that, rather than hide what they are doing from mom and dad, they can turn to us for help. As Solomon describes in Eccl 4:9-12, it is a wonderful thing to have backup:

Two are better than one because they have a good return for their labor. For if either of them falls, the one will lift up his companion. But woe to the one who falls when there is not another to lift him up. Furthermore, if two lie down together they keep warm, but how can one be warm alone? And if one can overpower him who is alone, two can resist him. A cord of three strands is not quickly torn apart.

This is not a Christian film – the Copes describe themselves as non-religious – so that limits Our Kids Online to being a practical, rather than spiritual examination of pornography’s dangers. That also means that the solutions they offer are only of the practical sort – they never deal with pornography as a sin issue, or as the devilish attack that it is.

Still, they get a lot right intuitively, with a key insight being that it is families, rather than schools, that are the key to kids being able to resist pornography’s pull.

But they also get a lot wrong. For example, Rob Cope makes light of looking through Playboys. While it isn’t overtly stated, the Copes also don’t have a problem with premarital sex, though they are very worried about the violent sort they have learned is happening these days. They’ve spotted a problem with what pornography is doing to sex. But they don’t understand the solution to bad notions about sex is a better understanding of God's intent for it: to give pleasure certainly, but in doing so, to bind husband and wife closer together, and to craft new life out of that union. It never really comes out in the film that the reason pornography is so fleeting, so unsatisfactory, is because pornography makes it about pleasure alone, and as such, misses out on the other two purposes.

The final caution is related to the topic matter. The Copes have done a good job of making a documentary about pornography as visually tame as you could ever hope for. But the verbal descriptions are – unfortunately, and also necessarily – shocking. This is not a film you would watch with your kids.

Sometimes in our Reformed circles parents will sometimes leave sex-ed to the school system. But what even the secular Copes understand is that schools can’t fill this role; we need to protect our children. Steven Shields, cofounder of Unashamed Unafraid, spells out the alternative:

“So if you’re not going to teach you child about sex, or about sexuality, or about how to treat the opposite gender… they will be educated. You just won’t be in charge of it.”

What if you’ve gotten a late start to it? Maybe you’re worried your kids are already looking at pornography and you're scared to even face the possibility. Then it’s even more important to get to it. As Russ Tuttle shares:

Our Kids Online is an eye-opening call-to-arms and I highly recommend it. But Christians need to build on what’s offered here, telling our children not simply what is wrong with pornography’s portrayal of sex, but spelling out for them what God’s good design for sex entails. Parents need to step up. May God so enable us! You can watch the trailer below, and rent it for $5 US here.