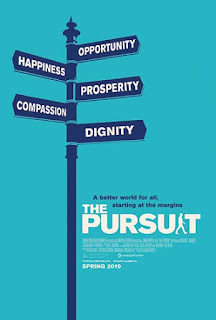 "From 1970 until today the percentage of people living at starvations door has decreased by 80%. Two billion people have been pulled out of starvation-level poverty. What did that!?! What did that? That was my vision quest, to figure out what did that."
– Arthur Brooks

The Pursuit is the story of one man's search for the best way to lift the world's poorest out of their poverty. And what the former French-horn player and current globe-trotting economics professor Arthur Brooks discovered is that it's the free market that did this, that lifted literally billions out of extreme poverty.

Brooks makes for an interesting guide for this journey. In passing he identifies himself as a Catholic only to, moments later, start sharing Buddhist wisdom. He takes us to the words of the Apostle Paul, but soon after takes us to the home of the Dali Lama.

So why would a Buddhist/Catholic former French horn player make a good guide for Christians interested in learning about economics, and the benefits of the free market?

It's because, as much as he might differ from us in big ways and small, his case for free trade is built on principles that line right up with Scripture. He doesn't quote it, but his foundation is the Second Greatest Commandment (Matt. 22:36-40) – Brooks is clearly motivated by a love for his neighbor.

That same command is often used as a justification for socialism – if we care for our neighbor, why wouldn't we use the State's taxing power to help the poor? But Brooks responds with a very practical, Prov. 27:14 type, counter-argument: good intentions are not enough. He does that by taking us to a coal mining town in America, where the mine has been shut down, to show that however well-intentioned the socialist government programs might be, they don't help in the long run.

He also takes us to the slums of India to visit some of the world's poorest. The desperately poor still remain, but Hindol Sengupta, editor-at-large for Fortune India, estimates that if not for market reforms initiated in India three decades ago, 300 million more Indians would still be impoverished. Socialism didn't help – this improvement came about by allowing people the freedom to make choices, sell their own labor and goods, and make the most of whatever (even if they were limited) opportunities that might come their way. This came about via capitalism's free markets and free enterprise, not socialism's compulsion and restriction.

So Brook's argument is simple then: if we believe good results are more important than good intentions, we should support the economic system that actually helps the poor. And that's capitalism.

I'd highly recommend The Pursuit, but it does require a little discernment on Christians' part. We need to remember that despite Brooks quoting Scripture – sometimes quite insightfully – his is not a strictly biblical perspective. So, for example, he makes this good point in citing 1 Tim 6:10:


"[Greed is] putting yourself always ahead of other people. I often reflect on the verse in the New Testament that's most often misquoted: 'Money is the root of all evil.'

"That's a misquote of the Apostle Paul. Here's the real Scripture: "For the love of money is the root of all evil." This really illuminates the problem of materialism. It's the not the  existence of material things. It's not the abundance around us. That's great! The problem is, not the money, it's the love of money. It's not the stuff. The stuff isn't the problem. It is the attachment to the stuff."

This is an important point, but it goes askew when Brooks immediately pairs it with the Buddhist philosophy of detachment. Buddhists are right that money makes for a lousy idol and can't possibly satisfy us, but the answer isn't simply detachment.

The proper corrective to false worship isn't merely to stop it; we need to start worshipping the one true God. This is where the film falls short. It is excellent in highlighting problems with socialism, and envy, and covetousness, and hard-heartedness. And The Pursuit even directs us to an economic system that will help many materially. But when it comes to what matters most – Who do you serve? – Brooks is stuck on the Second Greatest Commandment, and doesn't bring us to the First: to love the Lord our God with all our heart, soul, and mind (Matthew 22:35-40).

At a time when 4 in 10 Americans believe socialism is a good thing, and many Christians think it the compassionate approach, there is a need for a film like this, that makes the very practical case against socialism that it isn't actually caring because it doesn't actually work.

That message and a charming host make The Pursuit both an important film and a pleasure to watch.


The Pursuit is playing in limited engagements across North America (find locations here you check here) and can also be rented via the iTunes stores here.