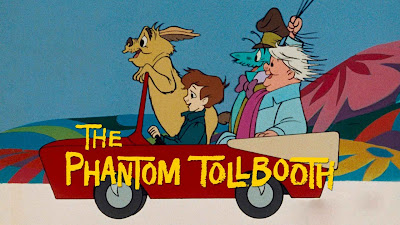 This is a peculiar movie based on a peculiar book, and as such, will have only peculiar appeal – this is not for everyone.

Things begin in "live-action" with Milo, a boy bored by everything, returning home from school to discover a mysterious package in his bedroom. It's a tollbooth – a talking tollbooth! – that invites him on an adventure if he has the gumption to go. So Milo hops in a miniature car, and the moment he drives through the tollbooth, the whole film switches over into animation, taking him to a weird and wacky world that couldn't be depicted any other way.

Both the book and the film are a morality tale, but of a secular sentiment. The bored boy is going to learn that all those things he's being taught in school – numbers, and letters, addition and spelling, subtraction and writing – are far more interesting than he's ever realized. He'll make this discovery by visiting the kingdom of Digitopolis, where numbers rank at the top, and the kingdom of Dictionopolis where words are said to be supreme. But this is a topsy turvy world, where a watchdog actually has a watch inside him, and a spelling bee, is a bee that can spell!

Some of that craziness is the way this world has always been, but things got worse after the kings of Digitoplosis and Dictionoplois banished their sisters, Rhyme and Reason. As the kings should have known, without Rhyme and Reason, things can get too silly, too quickly! That's why they task Milo with rescuing the princesses, equipping him to contend with the demons of ignorance that he'll meet along the way. These demons include the Terrible Triviam, who tempts people to do unimportant tasks now, instead of the thing they really should get to. Then there's the Demon of Insincerity, the Hideos Two-Faced Hypocrite, the Over-bearing-Know-It-All, and the Threadbare Excuse, all able to derail industry and the search for Truth. But Milo is ready to fight!

One caution would concern the demons, which might be scary for children. But these aren't Satan's minions – these are personifications of temptations (like in Pilgrim's Progress) that are trying to ensnare and delay Milo.

The other caution concerns the princesses Rhyme and Reason. Logic is an outworking of God's character, but in this secular story, logic – Rhyme and Reason – are the "gods" of the film (though they aren't described as such) able to completely transform the kingdom and save the day. It will be worth pointing out to kids how logic is not itself foundational, but lies on the foundation of God Himself.

This will be of interest to any who've read the book. For those not already familiar with the story, the closest thing I can liken it to is Alice in Wonderland, not in plot, but – I'll say it again – peculiarity. If your family is the sort that would be up for the surreal Alice, then they may love this adventure too!

That said, this takes a bit to get into - you might need to watch half an hour before you get a feel for what sort of movie this is. And also note, this is a film to be paused and discussed to be properly appreciated, whether to explain the wordplay to kids, or to point out to them the lesson Milo is learning.