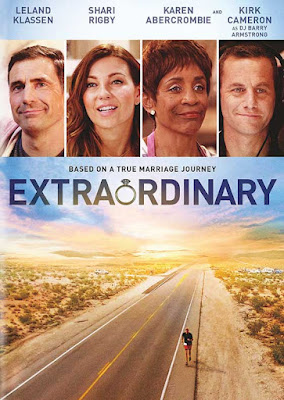 
If you're looking for a quiet Hallmark-ish film to watch with your spouse, the two of you all snuggled up on the couch, this might fill the bill.

Extraordinary is based on the real-life story of Liberty University professor and ultra-marathon runner David Horton. This is a fellow who runs not simply for hours, but for months, taking on challenges like a Mexico-to-Canada race (which puts a whole new meaning to "cross-country running"). While his athletic exploits have made him a legend to his students, these runs have come with a cost for Horton and his family: bleeding feet and knees, and swollen joints for him, and for the children, a dad who has been missing-in-action for their recitals and baseball games. Meanwhile, his wife Nancy has had to run their household on her own for months at a time and, when her runner returns, then she's had to nurse her utterly spent husband back to health.

When Horton's doctor says he needs knee replacement surgery and it'll put an end to his competitive running career, Horton still wants to do one last race. But unbeknownst to him, his wife Nancy has been busy planning a surprise vacation for the whole family, sure that her husband's knee pain (and recent heart surgery) will keep him home with them this summer. It's not to be: in a comedic twist what Horton is still thinking about – running the TransAmerican race from California to New York in 64 days – is announced as fact to a stadium of students, and then Horton feels like has to go, to live up to their expectations.

Horton is played by Leland Klassen, a gifted physical comedian, who brings a quirky charm to the role. That charm is much needed to make us care about Horton, who, if he wasn't so likable, would otherwise come off as a doofus, leaving his wife at alone for the summer.

My wife and I both enjoyed it, but concluded that a problem with Extraordinary is that it attempts more than it actually delivers. This is the story of a man whose identity has been completely tied up in his running – he's done it his whole life, achieved things others can't even dream of doing, and he's even managed to make running a huge part of his daily work because as a professor he teaches running in his physical education classes. Now he's been told that a needed knee replacement surgery is going to sideline him for good. So this is a middle-aged man struggling with his sense of identity, and his own mortality – that's fodder for a great film. But because Horton is blissfully unaware of what his wife is going through, we feel more for his wife than for Horton and don't really feel for him in his struggles.

What makes this still worth watching is that it is a doofus who (finally) learns his lesson. He told his wife that he thought God wanted him to use his running ability to inspire others one last time, and by movie's end he realizes that he may well have attributed to God only what he himself wanted. Horton learns that God has more than the role of runner in mind for him; father and husband should actually be taking precedence.

This gets a 6 out of 10 for its somewhat contrived plot – much of the conflict comes from husband and wife just not talking to each other. While I don't normally review films that score just 6, I made an exception this time because even as this is not great art, it is nice....and you can watch it for free. I also appreciated that there's nothing objectionable here, and that includes even the theology, which isn't deep, but also isn't dabbling in the heretical as frequently happens in other Christian flicks.

Overall, Extraordinary is a lightweight comedic drama about a doofus husband who takes a while to get his priorities right but who figures it out in time for a happy ending for all. That's all it is, and on some evenings that's really all we're looking for.

Watch the trailer here and watch the film for free below.