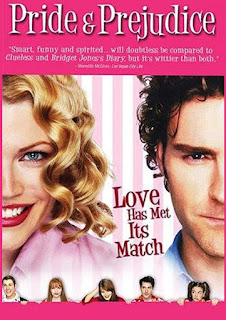 When a book is adapted for the screen, readers want it to be as close to the book as possible. So let's begin this review with a heads up: that did not happen here.

The central plot remains the same – these are women "in need of a husband" – but the setting has been updated to the modern-day USA, with five girlfriends all sharing a house just off-campus. Other departures include how the first love interest, Charles Bingley, came by his wealth: selling classical music CDs for dogs, and marketing them via late-night TV infomercials. And he drives a motor scooter. Oh, and Mr. Collins' proposal now has him make the compelling argument: "Elizabeth, we've been commanded to multiply and replenish the earth."

So if you aren't up for a light, silly treatment of your favorite book, this is not for you. That said, I do think it is for most everyone else. And if you've ever wished that someone today could write something like it, well, this is "something like it" indeed.

This version also adds an element glaringly absent from the book and every film version: a car chase!

There aren't many cautions to offer because, as it turns out, this was made by Mormons. Consequently, the violence amounts to a single fistfight played for comic effect. There's no sex, though it is alluded to twice, both times by the villain of the piece, Wickham. He first jokes that "there's only one reason people commit matrimony before they are 30” and follows that with a joke about being “relatively disease-free.” But his implied lack of chastity stands him in contrast with most everyone else.

The only other problematic element is a self-help dating guide called the “Pink Bible.” We had to explain to our kids that it was a “bible” only in the sense that it was purporting to be the final word on that subject – dating – as the Mechanics Bible would say it is for car repair.

This is not a faithful retelling of Pride and Prejudice. and yet it is a very good one, keeping remarkably close to the spirit of the book. That makes it the perfect date night movie for mom and dad, and a pretty good one for the whole family. The pacing is quick, the romance is sweet, and the humor is sprinkled liberally throughout. Of the 50 or so people I’ve watched it with, or loaned it to, somewhere near 90% have given it a thumbs up.

I share the trailer below with some misgivings – the film is a lot better than this makes it seem.