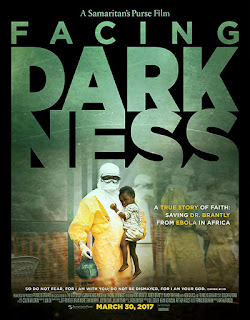 In early 2020, when New York was hit with a surge of serious Covid-19 cases, Samaritan's Purse set up a mobile field hospital to relieve the State's overwhelmed health services. Running towards danger was nothing new for this Christian group – they'd already been busy helping in Italy.

And back in 2014, when West Africa was faced with an ebola outbreak, they led the way there too, despite the risk. Facing Darkness is a documentary about that 2014 outbreak, and Samaritan's Purse's courageous response to it. This is certainly not a film for everyone, but it might be great viewing for anyone feeling overwhelmed by our current Covid situation. Here are Christians facing risks many times greater, and while they are afraid – terrified even – it isn't a contradiction to say they were not fearful. They kept working. They kept helping, even when one, and then two, of their own staff became infected. As Samaritan's Purse President Franklin Graham detailed, when he first got the news, it was devastating:

"My phone rang...and Ken Isaac said, 'Franklin, one of our doctors, Kent Bradley has ebola.' I didn't even know how to pray. I just kept saying, 'Lord, why? We were there to save life. We are there in your name. Why?'"

And, of course, they weren't the only ones impacted by the outbreak. The film begins with a young man sharing, one after another, the names of his aunts, uncles, his mother, brother, sister, nephews, and other relatives, who were all taken by Ebola. It is heartbreaking!

So why should anyone see this film? Why would anyone want to? Because, at a time when the world is overwhelmed with fear, here are Christians who were certain God was with them, and trusted He would provide for them even in the face of sickness and death. These are people who live out the promise God has given, that whatever the here and now, He has a treasure stored up for them in heaven. That makes this such a hope-filled film. It is wonderful!

Death is an ongoing topic, which means that even as the visuals here are pretty safe, this is not a film for children.

Facing Darkness tells an amazing and encouraging story – brothers and sisters in the Lord showing what it means to trust Him with our all – and that's an example that we can all benefit from.

Check out the trailer below, and watch the documentary for free (with ads) at Tubi, or rent it at Amazon, Vimeo, and elsewhere.