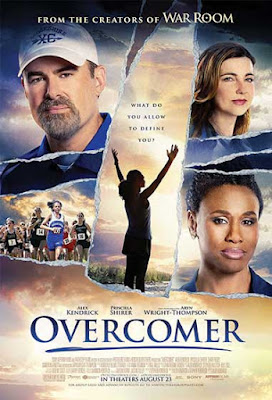 This was going to be John Harrison's year. The high school basketball coach had all his best players returning, ready to make a legitimate run at the championship. But then the local steel manufacturing plant closed and took their 6,000 employees, and most of his players, out of town. So what's a basketball coach to do when he has no team? How about switching to a new sport? But when the school principal convinces John Harrison to give coaching cross country a try, his new team turns out to be just one student, Hannah,...and she has asthma.

That setup allows for a generous dollop of humor in this drama, but the best part of this film is more serious. Producers, the Kendrick Brothers, are known for packing messages into their movies, and they do so once again, making this film/sermon about finding our identity, not in our job, spouse, political party allegiance, or what ethnic group we're part of, but in Who we belong to. That's a message the Church needs to hear.

Because this is a message movie, it is easy to criticize – one secular reviewer rated it as just one star because it was too "churchy." However, for Overcomer's intended audience, being edified even as we're entertained is no reason to knock a film. What makes bad Christian films bad is not that they have a sermon inserted in there somewhere. The truth is, every film, Christian or secular, has a message, and the quality of the message is often what sets the great ones apart from the good ones (think Chariots of Fire, Lord of the Rings, Casablanca). What makes bad Christian films bad is that they deliver their message poorly, with bad acting, bad writing, bad production values, or some combination thereof.

In contrast, the Kendrick Brothers been upping their game from film to film. And Overcomer is them at their very best.

Though there are no concerns about sex, language, or violence, there are still a couple cautions to share. The first is that there are some Arminian flavorings to the film, coming out most overtly when school principal Olivia Brooks tells Hannah that Jesus offers salvation, but "He doesn't force it on you." That, surely, is news to Paul, whom Jesus turned right around on that road to Damascus, and without his permission. I heard an Arminian friend once liken Jesus to "a gentleman" in that he would never force Himself on us. But God, in His Word, reveals Himself, not as a gentleman, but as a parent, and as every parent knows, when our children head off in the wrong direction, we do force our will on theirs. That's what loving parents do.

However, this flavoring is a minor matter. More substantial is when Coach Harrison discovers that Hannah's dead father is actually someone he knows...and isn't dead at all. Hannah's grandmother, who is raising her, told Hannah her father was dead because he was into drugs, and because he had indirectly caused Hannah's mother's death by getting her involved in drugs too. So grandma, to keep Hannah away from a father who had caused them such pain, told her this lie. Coach Harrison ends up going behind the grandmother's back to introduce Hannah to her now Christian father. It all works out for the good, but that a teacher would work actively against a guardian's wishes should have been treated as a bigger issue than the film made it. It is a complicated situation, with an absent father's interests conflicting with the desires of the established guardian grandmother. But it seems, at the least, Coach Harrison needed to go to the grandmother and tried to convince her, rather than going behind her back.

While that's a big issue, it's an easy enough one for parents to correct by hitting the pause button and discussing.

What makes the film worth watching is the overall identity message. Even here there are nits to pick, as the Arminian flavoring to the film manages to even make having Jesus as first in our life somehow about us, as much as it is about Him. That said, this is still an effective reminder of how often we can put other things – our career, our family, our hobbies, our interests – ahead of our God. If your family liked Facing the Giants, or Courageous, or any of their previous films, you'll certainly enjoy the Kendrick Brothers' latest effort too.