Darwin: The Voyage that Shook the World 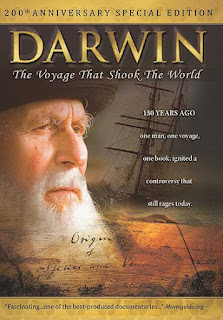 This must be the most expensive documentary ever made by creationists and it is certainly the best looking. Creation Ministries International (www.Creation.com) spent more than $1 million staging and filming key events in Darwin’s life, including his time on the HMS Beagle and his visit to the Galapagos Islands. The production values are simply astonishing: solid acting, slick computer graphics, gorgeous close-up shots of the Galapagos wildlife - and a narrator with the perfect classical British accent.

The producers wanted to make this as good as anything you might see on the Discovery Channel, or on a PBS or CBC documentary because they aimed to get it shown on public TV around the world. However, that aim also impacted how they presented the content. If they wanted to get it shown on a channel like CBC they certainly couldn’t make it explicitly Christian(!) so rather than being a defense of Biblical Creation, the documentary limits itself to critiquing Darwinian Evolution.

The end result, then, is a persuasive, gorgeous, tactful, hour-long takedown of Darwin – the lie is exposed. The downside is that there isn’t much here pointing people to the Truth. Some have criticized this as a job only half done. That might be, but the half that it does do, it does brilliantly.
You can watch the trailer below, and buy it on DVD, or search for it on your streaming service.
Posted by Jon Dykstra at 11:01 AM